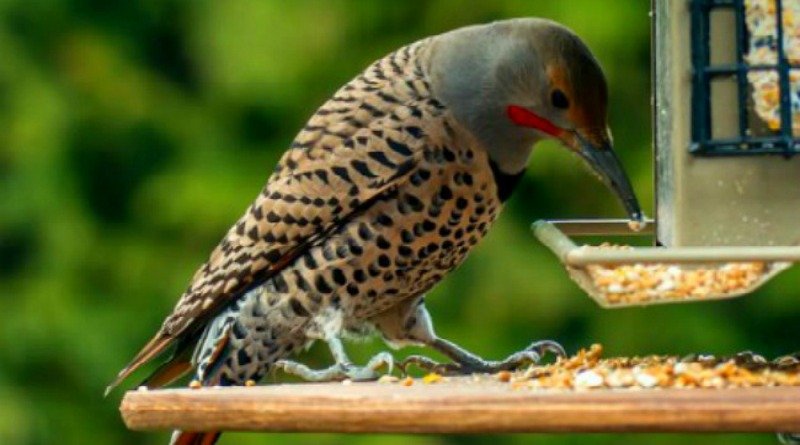 Have you watched a woodpecker?

I tried yesterday to get a video when we spotted ( and heard) a woodpecker in the backyard trees. He was high up and just drumming against the bark of the tree with his little beak. Sounded like a machine since he goes so fast.

But of course, by the time I got the camera, found it again in the trees, then found it through the camera lens ( I have the most difficulty with this), it had flown away. So I gave up and just continued with lunch.

I will get you on video one of these days, woodpecker!

However, I wanted to learn more about woodpeckers, and since the weather has been so unpredictable here in Ohio, (meaning really cold one day and pleasantly mild the next), I decided to make coffee and cuddle up under a quilt and see what I could learn about those woodpeckers.

I am not sure which variety of woodpecker we saw, but I think it was a hairy woodpecker due to its size and coloring. There is a smaller one called a downy woodpecker too. I know this guy or gal had a red spot on its head, but otherwise its coloring made it seem to blend in with the bare trees here.

I hadn’t noticed any woodpeckers at the feeders, but our feeder is in a position where I can’t easily see it. And besides that, we have a lot of trees around and near us where the birds find insects in the  wood and eat them, so woodpeckers do have a buffet in the woods. They also eat berries and nuts.

If you have heard the woodpecker drumming ( and hopefully it isn’t drumming on your house), it really has a fast and machine-like speed. And those holes can really get large if they keep working at it. But what can you do? They have made a lot of holes on our barn out back but haven’t, so far, started on our house.

These birds can peck or drum as quickly as 20 times per second! But this doesn’t hurt them like it would a human going that fast. Imagine how we’d look moving that fast! A woodpecker’s brain is specially cushioned by a cartilage between the bill and skull to absorb the shock of impact.

And get this! Each blow is delivered at an exact 90° angle.

And their tongues! They are sticky, and barbed and about 4 inches long so that they can reach the insect or larvae they are searching out. But the drumming noise is to attract females and to communicate through their territory.

Next time you see one of these woodpeckers, check them out. Interesting birds. And you will see them right side up or upside down too. They have what is called zygodactyl feet. Their toes face both front and back which enable them to grip trees and poles vertically. So you are seeing them scampering up and down the tree bark, sometimes head-down. Just another day in the woods for them.