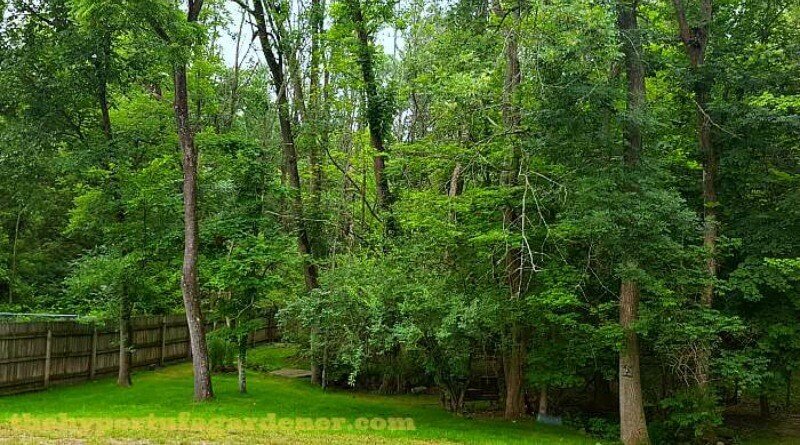 When we purchased our home in 2000, we fell in love with the large yard,  half of which was covered in large 50-75+ year-old trees. There was white ash, maple, black walnut, elm and black locust. And a lot of small scrub trees. Here in this region, there are a lot of the scrub trees, honeysuckle being our under-story tree.

Both my husband and I were raised in the country, and we love having trees in our yard. It makes me feel like I live in a park. This rear yard gave us a spot to play, ride bikes, and quad runners and golf carts.

Then comes Agrilus planipennis or the Emerald Ash Borer. http://www.hungrypests.com/

Update: Since I originally wrote this post, the EAB has spread into more states such as Iowa, Kansas, Oklahoma, Alabama and more.  Please be aware if this invasive insect is reported in your area and do your best to spot it and report it to the proper authorities. The beetles emerge in the springtime so keep an eye on your trees checking for the small D-shaped exit holes.

The Emerald Ash Borer was first identified in Ohio in 2003. It had arrived here from an infestation which occurred in the United States originally thought to be in Michigan.

[su_quote url=”http://www.nrcan.gc.ca/forests/fire-insects-disturbances/top-insects/13395″]The emerald ash borer is an Asian species native to China, Japan, Taiwan, Korea, Mongolia and the Russian Far East. In 2002, the beetle was detected for the first time in North America in the vicinity of Detroit, Michigan, and later in Windsor, Ontario. Data from tree ring analysis indicated that the beetle had probably been present in those areas since the early 1990s.[/su_quote]

This invasive insect was thought to have been transported into North America via wooden packing pallets and materials being shipped from the East. The emerald ash borer is not an invasive insect in the Far East because of natural predators which keep it in check along with resistant trees and parasitoid wasps.

Life Cycle of the EAB

1. Adult borer chews its way through bark and emerges from a “D” shaped hole in the bark of its host tree.

2 This green beetle will munch around on the foliage of the tree, then find a mate and get ready to lay its eggs.

4. The larvae tunnel through the area between the bark and wood into the cambium and phloem where nutrients are transported within the tree. This slowly starves the tree because it becomes harder and harder to transport the nutrients throughout the tree.

5. The larvae eventually tunnel into a spot just under the bark and winter there, pupating in the spring, and again emerging as adults.

Cities and counties have tried to find a way of injecting the tree or the soil with a chemical to fight off the invasion of these insects, but results have varied. Emamectin Benzoate has been used to inject trees in the outer layer  ……. You may read more about this pesticide here: http://www.fs.fed.us/foresthealth/pesticide/pdfs/052-23-03b_Emamectin-benzoate.pdf

A tree doctor may want to try injections for a tree which would cost somewhere from $75-100 per injection for a 17″ diameter tree. Several of ours were twice or three times that size , so we decided not to treat them due to that expense. There was no guarantee that this would protect or rid them on any infestation, so we have just let nature take its course.

Dying trees are still a habitat for birds and squirrels and provide protection for many others. These dead and dying ash trees only becomes a danger when they are putting homes or city/country roads in jeopardy due to the possibility they may blow over in high winds or storms. Many cities have spent a lot of money cutting and removing from city streets.

We have thirteen dead and dying Ash trees. Or we did. We had to kiss our ash goodbye.

Here in Ohio, several years ago, we had county bans on taking wood from county to county to prevent the spread of Emerald Ash Borer. You see, if firewood is taken hundreds of miles into other states or areas of the country, this helps spread the insect  since it resides inside the wood as a larvae or pupa.

The adult would only fly a short distance in its life, but transporting infected wood has spread it through all the counties in Ohio now.

Note: See info about another danger for our trees in the post Asian Longhorned Beetle

This shows how important it is to pay attention to that kind of regulation or ordinance as it may allow us to keep our trees if we can find someway of stopping any invasive pest.

We are battling the Asian Long-horned Beetle now in a similar fashion. It is coming after our maples, walnuts, beeches and more.  Read more about that battle here: http://asianlonghornedbeetle.com/

As for Ohio and the Emerald Ash Borer, in the long run, I guess it won. http://blog.cleveland.com/metro/2010/09/ohios_war_against_the_emerald.html

Check to see the status of any infestation in your state. EmeraldAshBorer.info