You guessed it. We spoil our grandson.

First of all, a boy has to have great place to play where he can get out of the house and he needs something to do. So Papaw and Nana will just make him a city!  The best thing about Jacobville is that most of it is in his own imagination which is the key to his enjoyment of this “Jacobville” playland. 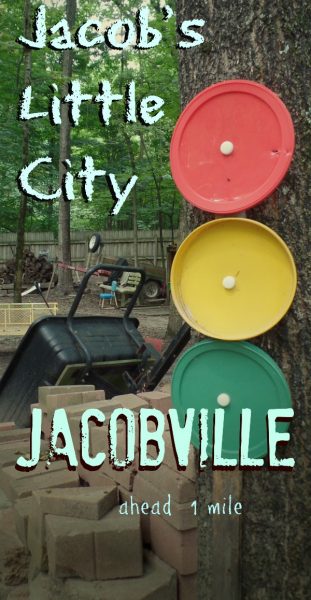 Yes, we spoil him like there’s no tomorrow. He is our one and only grandson, so why not? Papaw knows how little boys want fun and excitement, and things to let your imagination roam. So, we got together and figured out how to create him a city.

After all, when a boy has a car, he needs a place to drive.

And a place for his friends to come and visit too!

So we’ve made the wooded area to the rear of our back yard into a town called Jacobville and that’s where he spends a lot of his time. I used some old lids from my coffee containers and painted them red, yellow, and green. Jacob helped with these and advised of the color needed. He was only about 5 years old at the time and learning as we went.

He told me the order that they go in and he got it right. Red at the top, then yellow in the middle, and green on bottom.

And what town would be without a “drive thru” fast food? Can I say Mickey Dee’s?

I had an old arbor that we had taken down, so we moved it to the woods and fixed it into a drive through spot. An old alarm clock face had buttons to push and I had a wooden slot which looked like a spot to put your debit card. We had many of those in the junk mail. ( I am speaking of a plastic fake card with Mr. Customer written on it.)

He loves HIS card to use.

Jacob drives his battery-powered John Deere Gator every chance he gets. (This is an affiliate link and I may make a commission if you make a purchase. Thank you for your support of my website. )
He is outgrowing it now, but it is so hard to give up. And it has been countless hours of fun for him. If you consider this kind of a toy for a young child, be forewarned that he didn’t like it at first. He was a little afraid of it. But after that first few months, he just wouldn’t get off! For my Jacob, it meant years of fun! He even used it at Halloween. He was a policeman.

Jacob needed a parking space next to Papaw’s barn, where Papaw parked his Gator. 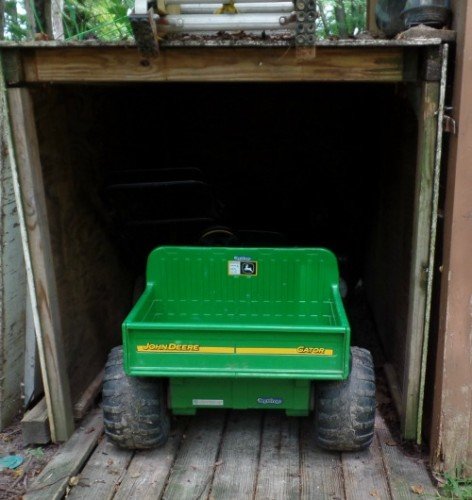 So Jacob has his own. So cute parked there.

He has just about worn all the grass off, along with Papaw and Uncle TJ and friends running bikes and dirt bikes and four-wheelers and everything back here. We have a golf cart with a dump bed which we got Papaw for Father’s Day one year.

He isn’t a golfer at all. Just wanted this vehicle to ride around in the back yard. ( Yes, Papaw is spoiled too.)

He can always run by the bank if he needs to. It’s right there near the tree. Just punch in your PIN and there’s the money.

Here is his office, but he doesn’t use it much anymore. He doesn’t want to sit there too long. He wants to get up and drive.  So if you want to make a city for your grandchild, or you Moms and Dads want to make one for your kids, do it. Only limited by your imagination. And to kids,  everything is “in their imagination.” 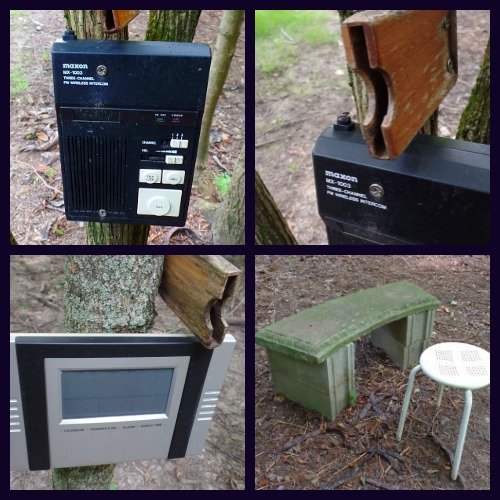 And he can help me in the garden by taking a bucket of weeds I’ve dug up and hauling it down to dump in the compost pile. He is a great helper.

He likes being the “guy with the wheels.”

Jacob has learned a lot from driving his machine. He can steer, which is a talent that I did not learn until Driver’s Ed in high school. He has learned to change his own battery. We have two batteries because it does run down quickly. He can ride for an hour or two and then the battery needs recharging.  But he can take it out and replace it on his own (sometimes he needs a little help getting the bar back through the slots.) And we always connect and disconnect from the power source.

He will be a quick learner to drive. But for me, I guess I am a slow learner, but I could not understand how to keep a car in the road! It was so embarrassing.  As I seem to recall, the one and only time my Dad took me out on the road to teach me to drive, I side-swiped a guard rail.  Ooops!

My Dad let the Driver’s Ed instructor take care of the rest of my training.

Just a few memories of my growing little grandson.  And we don’t spoil him at all. Not a bit!