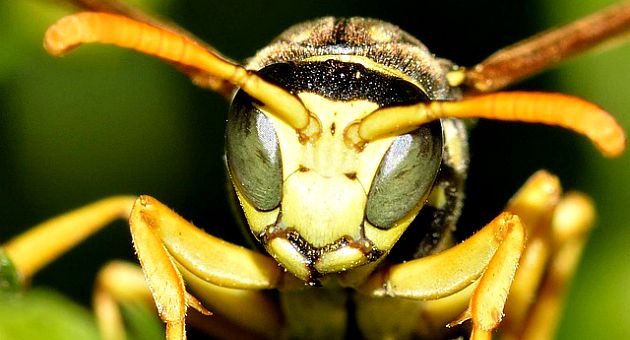 A paper wasp has a face that, I guess, only a Mother would love…..and I guess that would only be its own Mother. Not exactly an insect that you would want to cuddle. When we discovered a paper wasp nest up in the overhang on our front porch, we were horrified. My grandson and his friends are out there all the time, not to mention the rest of the family. We use the front entrance unless we happen to go in through the garage. So we knew we had to get rid of wasp nest fast.

This wasp is the native North American Polistes fuscatus which is one of the social wasps in North America. They do have a queen but don’t live in a hive but in umbrella-shaped nests made by mixing wood and saliva.

We are all familiar with the small brown nest usually up on the eaves of our homes or sheds, but they can be found in the woods attached to other structures. It is made of a collection of cells which are visible to the naked eye.

As you see if the photo above, the paper wasp makes a small stalk by chewing wood and mixing it with saliva and making a paper pulp product for forming this strong pedestal to support the whole nest and all of its occupants. Great architects, eh?

Wasps are Pollinators Too

Wasps, just like honeybees and bumblebees, are important pollinators all over the world. (Ref: http://www.fs.fed.us/wildflowers/pollinators/animals/wasps.shtml)

Even though the hairs on the body of the wasps are finer and not as visible, they still collect pollen as they travel from flower to flower. Their visit to flowering plants could also be to find other insects to take home and feed the babies since they eat caterpillars and other insects such as spiders, flies and termites, along with the carbohydrates from nectar, fruits and sap.

This photo shows a wasp on raw meat. Guess she likes a good steak if it is available. And it doesn’t fight back.

I suppose one of the worst things about a paper wasp is that it can sting over and over again. It has a smooth stinger, not a barbed type like a honeybee. Those honeybee barbs hook into your skin and literally tear out the abdominal organs of the honeybee. The honeybee will die after stinging and the stinger continues to “pump” the venom into your body.

But the paper wasp stinger has a smooth tip and can sting over and over again and injecting venom into many spots until you swat her or she flies away. But, unfortunately, if you squish her, her body gives off pheromones which alert all her friends to attack you too.

But that venom could be a precious commodity! I found research going on where the studies were showing some promise using wasp venom to fight cancer tumors. This is promising news and you can read more about it here.  http://blogs.discovermagazine.com/d-brief/2015/09/01/wasp-venom-cancer/#.VemQ2Jf1KJ8

We used a ShopVac to get rid of our nest and here is a short video of the nest itself. I didn’t film the “take down” since I didn’t want to be near as I am not as great a runner as I used to be!

Have a great day! And remember that the paper wasps are not all bad even though they have a wicked sting. It is not necessary to call bee exterminator unless you have a really large infestation. We can co-exist with them, right?