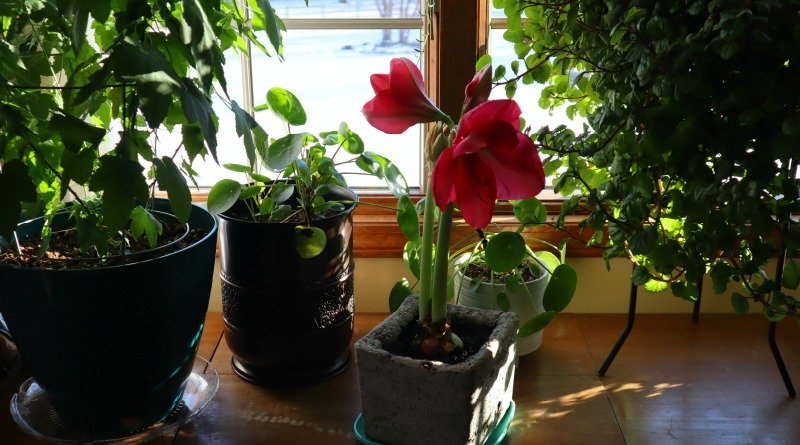 Needless to say, any gardener would advise that it is not the best time to transplant any plant while it is blooming. Especially not a plant that grows from a bulb. But I just had to transplant my Amaryllis (Hippeastrum) right now. It is blooming so well and with so many blooms, but it has a fungus gnats infestation that I know I brought home from the store when I purchased it.

I purchased it for $5 at our local Walmart. It was just one of those impulse decisions that I made. They were  just a few on a shelf already planted and with a dry bulb showing above the soil. At least it was planted like it should be! (Leaving one-half to two-thirds of the bulb exposed.)

Thinking that I could rescue this amaryllis since we all know they just go in the dumpster if not sold, I brought her home and put her on a table downstairs. I thought I would water her and look her over before she joined all the other plants. There was only a small tiny blade of green sprouting, maybe only about half an inch high. I should be able to get a good bloom from her.

Watered her well and put her under a light downstairs and then kinda….sorta…forgot about her.

After remembering that I had an amaryllis, I went down to check on her and she did have an inch or so growing from the tip. But I noticed that there were fungus gnats crawling around on her! They disappeared down into the folds of the sprouts and then back out again! Immediately I thought that I had brought home a gnat infestation to my other plants. I hadn’t set her anywhere next to other plants but they were in the same room! Oh no!

I got my cinnamon spray and gave her a good dose all around her foliage sprouts and across the top of the soil and decided to keep an eye on her. She sprouts pretty quickly and that sprout showed that obviously it was not just a leaf but a flower stem. It was somewhat short but was very large and wanted to tip over the pot based on the high weight up there at the top.

I knew I would damage some of the blooms if I allowed that flower to get large and cause tipping, but in a few days it was obvious that this single stem was going to split into three blooms! I had never had this much before in one stem, so I was very excited. But I thought “Should I transplant it right in the middle of blooming?”  This really isn’t the time. Would it cause the bloom to fail?

Go Ahead and Transplant My Amaryllis

Since the gnats seemed to be conquered (as far as I could tell), I decided I would go ahead and transplant the amaryllis into a heavier hypertufa pot. It’s not too heavy, but heavier than the plastic pot she came in and I felt this would give the whole plant a weighted bottom so she would not tip over.

Her second stem seems to be a multi-flowered one too and I just had to see her through til all blooms had happened. So transplanting, here we go!  Here’s the video.

She looks so lovely now! Full blooms are almost there on the one stem and the other is opening at least three, maybe four. Can’t tell yet about the third stem but this is just perfect for me. I have never had this many blooms from one bulb.

I am easy to please, right?

My plans are to keep her alive and feed her when finished. I will cut off the stems after the flower wilts, cutting them all the way back to the bulb top. Then the leaves can grow all year and store up enough energy for her to bloom again next year. So much fun having flowers in the winter season! I have had an amaryllis bloom for me again in June, but I won’t get my hopes up.