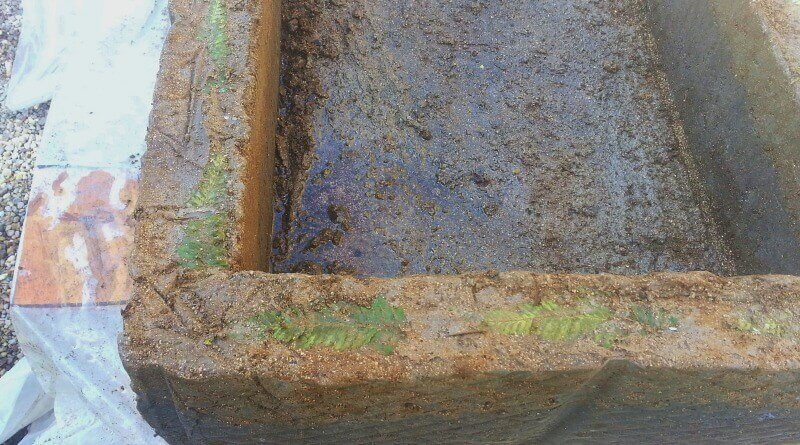 I made it.  A Big Hypertufa.

I’ve done it now. I made the biggest hypertufa ever!

It is four feet long and two feet wide and almost one foot tall! I made the sides of it about three inches thick, and included the same for the bottom. It is a Monster. I have been calling it the T Rex Trough.

I made up a huge amount of the hypertufa mixture, but ended up having to make even more.  I had to make up two loads of mixture in the cement mixer and it was so full, I had to put a “shower cap” on it. For real!  I used a whole bag of 94 pounds of Portland cement! That whole bag has roughly 9 gallons of cement.

Do the math! I had to put 13 1/2 gallons of peat moss and 13 1/2 gallons of vermiculite in this mix. And I used a whole bottle of charcoal cement color in the first half of the mixture, and when I realized that I was needing to mix more, I just had to go with the color as it comes naturally.  So I will just say that I am going for an ombre effect…..right, that’s my story and I am sticking to it.

It was hard to judge an amount needed since I had not made one this size before, so I ended up using half of the bag of Portland for a first batch. It seems like so much, but it was not enough.

After I loaded in a great deal of the hypertufa mix for the bottom and firmed and packed it to minimum of three inches thick, I packed the sides also about the same three inches thick, and I really loaded in the mixture. Then I used the side of a small board to thump! thump! on it to be sure I was knocking out all the air holes in the mix. You can see the  dents in the surface.

Of course, once I firmly packed it in, I smoothed the sides well. The outer surface of the big hypertufa has the imprint of hardware cloth, ( I think it resembles a basket ) but I didn’t take photos of that. It is also buried into the bottom and sides  for the extra support.

This is the view from inside showing the walls. In the picture above,  you can see the cross-brace to prevent the weight of the hypertufa mixture slumping into the inside. The extra small corner piece was added to give us a more firm grip on that inner form and to give us a place for the nails and screws.

Once both cement mixers full of hypertufa were added to the form bottom and sides, I felt it was big enough to finish. I smoothed and tried to be sure the sides were packed, leveled, and, as a final touch, I snipped some fern leaves and put them all along the sides of the top edge.

I was not sure how this would turn out, but it sure looked pretty as I put it away.  ( The imprints lasted for a while but faded away. They were prettiest when they were green.)

This first photo at the top is actually after the unwrapping, and the green fern leaves were still green. ( I forgot to take a picture as we made it.)  But it really looked good. If I were artistic, I would paint them on again…like a tattoo. I was disappointed when they did fade away and flake off. But I still have the best Big Hypertufa ever!

I used a wagon to transport the Giant T. Rex Trough over under some side bushes to set up. It remained in the form for a about 10 days, and then I removed it the surrounding wooden frame.

It was sitting upon a large piece of particle board and we put these large planks under it so that would have a way to transport. It gave us “lifting” handles.

My husband says “What do you mean “Us.”?  My husband, son, and son-in-law did the lifting, not me. I just directed traffic, so to speak.

How did it turn out?

Have you made a giant trough? How big?

( This hypertufa trough was actually made several years ago and it has been one of my favorites since then. I am shortly to be moving and I want to take it with me. Wish me luck moving this one, since it hasn’t been moved from its spot since we first put it there. )