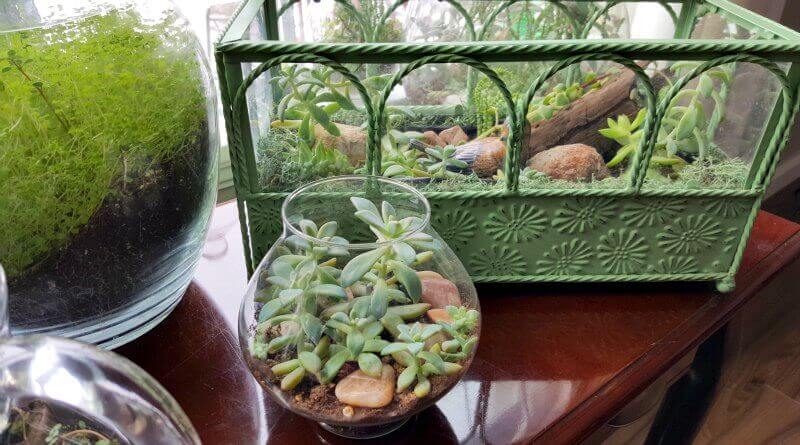 This winter, I have an indoor succulent garden!

And I just love it! It has been so easy (compared to previous years) to have small glass containers planted up with all my succulents that won’t survive an Ohio winter outdoors. I had written a post about my indoor gardens previously, but now I have added another one. This one is a small “greenhouse” shaped metal box that I picked up at a tag sale for $5. And it is doing wonderfully! What do you think?

So many of my previously planted cuttings have grown so well that I was able to transplant some of those into this new container. I have added a small piece of driftwood that we picked up when we went to Outer Banks.  That small piece of driftwood has been out in so many rains and storms that I don’t have any fear of it still having any salt-water irritants for my plants. In fact, I have had it in an outdoor planter for a few years at least. But I put it up in the fall and let it dry out, partly to be sure no critters would emerge indoors. I have enough, thank you.

By the way, I hate stink bugs. OMG, what a nuisance they are. Just annoying, since they don’t get into foods etc (except by accident.) But it is so annoying to be sitting reading by a lamp and hear a clattering and buzzing and know that there is one loose again. And believe me, I have to track it down, or I won’t sleep for being afraid it will come crawling on me in the night.

I keep one of those mouse trap/insect trap sticky boards and grab it up. Then, if I am careful, I can knock it off the lampshade or wall or faucet handle….right onto the glue! Ah hah! Trapped, sucker!

This year hasn’t been as bad as past years with those stink bugs at my house. We made sure to caulk around the windows and weatherstrip doors etc and that made a big difference. But these bugs are still an invasive pest in our gardens. So we must do all we can to eradicate these bugs.  Ref:  Invasive Species Here.http://www.invasivespeciesinfo.gov/animals/stinkbug.shtml

Back to my little indoor succulent garden.

This past summer I purchased  this a small greenhouse planter similar to this  metal greenhouse-shaped planter at a tag sale through our Master Gardener’s group, and I snapped them up, two of them. (Score!)  I have just waited for inspiration to help me decide what to plant in them. But as my little indoor garden planted in the glass terrariums grew larger and larger, I decided it was time for them to share.

I lined the bottom of the planter with heavy plastic so that I could water it safely and not ruin the furniture underneath. I filled the soil mixture up to the level as high as that lower green wall. It took so much more soil than I thought it would, but I wanted to pack it in tightly so that the plants wouldn’t settle and then be below that “viewing window.”

My potting soil was fairly dried out since it was in a container sitting open in my garden shed. I scooped out a whole lot of it, thinking it was too much, but as it turned out, I just had enough. I mixed it in a large bowl with some poultry grit which I use for all my succulents. It gives the soil a very gritty texture so I can be sure of good drainage.  And it is also good as a top dressing. I mixed about a teaspoon of cinnamon and poured about a cup of hydrogen peroxide mixed with a cup of water to hydrate the soil. I feel these help to soil be less of a danger to my plant getting infected with fungus gnats………..The Bane of Indoor Gardeners everywhere.  Then I covered this and let it set overnight. Next day it was perfect fluffy soil, gritty, but perfect.

I filled up the little indoor succulent garden with the soil, after lining it with plastic. I tucked the plastic down and stuffed reindeer moss all along the outside of the lower “window” of the planter. It looks a little strange and I can see some places I need to retuck and cover, but overall, I got the look I was going for.

After I had all my succulents planted and arranged and re-arranged, then started over again, I finally had it looking like I wanted. I added the driftwood, a bird, and some stones. I also had a hypertufa stone made from leftovers that I knew would come in handy one day. So that went in too! That’s it just in front of the bird. To the right in the photo below.

I usually have a few odd things like that bird lying around that I can put in a planter. I have a tiny red bike that I am waiting to park in a special garden setting one of these days. My husband says I am a pack rat, but I don’t think so. It is hardly larger than a spool of thread.

I am pleased to say that my final little indoor succulent garden went well with the other glass planters. I have them in the dining room since that is the best light and I really love the look.

The little teapot didn’t get in the photo above since he is escaping his boundaries and I am having to move him and snip off the “steam” coming from his spout. And fish out a stink bug who thought he had found a great hiding place. Witness his fate up there face down in the glue trap!