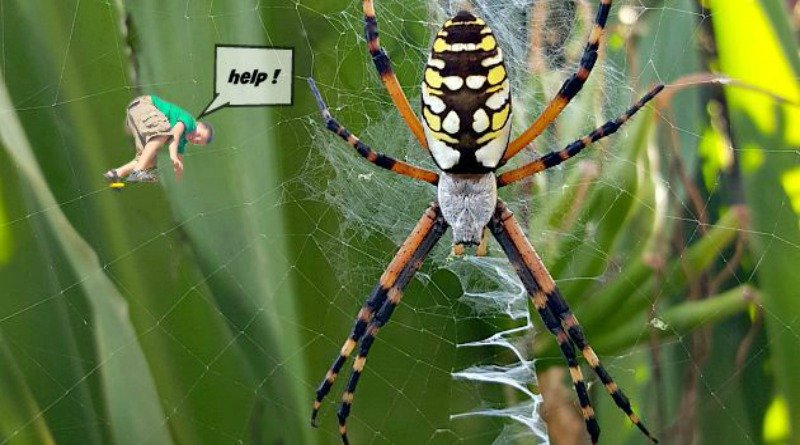 Let me just tell you up front. I like spiders. I think they are fascinating. I like to look at them and watch them.

But I DON’T WANT THEM ON ME.

Is it the scurrying and crawling that scares me?  Is it the web dangling around that I just hate to run into? Because if I run into a web, that means somewhere lurking near it was a spider.

I know we must be conditioned to fear spiders.

Just like bats and witches. They use spiders in Halloween decorations to scare us!  Have you seen butterflies and honeybees in a “scary” Halloween party display? I think not!

Not many spiders are poisonous, but we are afraid of their bites anyway. I guess way back in the day, when a primitive family took shelter somewhere and were bitten, a victim’s later death was blamed on the spider they saw hanging in the back of the cave or cabin. Not on the disease they had been suffering with for some time.

We saw so many of the Orb Weaver type spiders ( also called Banana Spiders ) on our recent 2015 vacation in Florida. I was just not ready to see so many. They were just all over the place. Around the house, they lurked in all the bushes and plants and were suspended on giant webs across the road and from the phones wires to the bushes below.

Do you get used to them beside the road in Florida?

I made a video of all those spiders next to the road or highway. It was a pretty heavily-traveled place to be stopping and looking at the spiders. It was on the A1A north of St Augustine right along the beach. It was unbelievable how many orb weavers were just suspended along the road in those webs. Do the birds not eat them? Do they taste bad?
https://youtu.be/M2mI6ekbqbI

Is that why there are so many, because they are nasty tasting to the birds?

Another spider who folds up and eats her web? For Real!

Another photo, and I am sorry these weren’t very good. I was too worried about a spider getting on me. We were out there on the deck and there is a walk-over to the beach. This wooden path is built over the palm trees and other vegetation that is just stuffed with spiders and lizards and all kinds of little crawly things. And I was out there in the dark!  I was afraid a spider would get me. But I wanted to walk over the beach also at night. Love that beach in St Augustine. We land-locked Ohioans need to be there night and day. I just had to not worry about the spiders!

I was so astounded when we were watching this spider early in the morning around sunrise. It had a large web just out of reach of the handrails of the deck and walk-over to the beach. Anyway, as we were passing, I see it and start staring since it was so big. All of a sudden, it just starts gathering and folding its web up and Taking It Down! It was the strangest thing I have even seen. We saw it start to “reel” in the lines and just thought it was drinking the dew drops caught in the web. But it was reeling it in, gathering and folding, and then EATING THE WEB.

Maybe I have lived a sheltered life, but I never heard such a thing. But we watched it. And believe me, she was so fast. It was reeled, folded, and eaten within two minutes maybe?  I would not have had time to go set my coffee down, grab my camera, get it turn on and focused and it would have been over!  I swear.

And I found a video about it here.  https://www.youtube.com/watch?v=PkILnPfs6Ck

As for arachno-hysteria, that is the extreme aversion to spiders. Some people can hardly be in the same room, yard, city etc with spiders and freak out. My daughter didn’t like spiders here in Ohio, but after our recent trip to Florida and getting used to what we saw there, if she sees a spider here now, it doesn’t bother her as much. She says “Those itsy-bitsy things, that’s not a spider. This one is a spider.” I guess that’s how you cure arachnophobia.

Have a great day! And try and not think about spiders in the wind! If you live in Florida, tell me. Are there spiders all over Florida just “hanging?”

Shared at the Blog Hop at http://mymaplehillfarm.blogspot.com

Update:  We returned to Florida this year 2017 and I was shocked to find NO SPIDERS. We stayed in the same area at almost exactly the same time of year and saw absolutely no “banana” spiders.  There were none hanging on webs from the utility wires, none seen in bushes on the roadside….Where did they all go?

Perhaps one of you who is a resident of Florida especially in this particular area of St Augustine and Ponte Vedra Beach could help me with some additional information. I really missed seeing the spiders this time and wanted to get some better film.

Where are they? What happened?