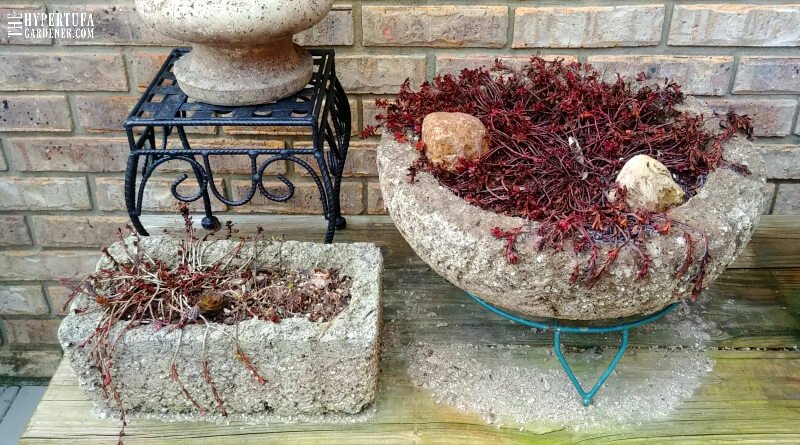 This late winter which is shortly to become spring, I have noticed that several of my hypertufa pots and planters seem to have suffered some kind of damage over the winter. They seem to be crumbling or “shedding” a sandy crust. I am not sure what to call it.

I don’t recall having this any other year with my hypertufa containers. So I am not sure what to attribute this to, do you? It may have some correlation to the pots age, but all of these vary from several years old to new last year.

A few of the pots still seem just as smooth and strong as before, but then the others have a sandy texture when I rub across the surface and this seems to be what is on the table around them.

Have you had this happen to you? I am investigating my pots, hoping for some warmer weather to really get out there and do some comparisons between the different pots. I do know that the tables that seem to be in the worst shape are tables located under a roof overhang. It could be a combination of some kind of deterioration and also some runoff of heavy rains in our new geographic area.

We had moved last year so this is our second spring here, just coming up to our first anniversary of the move. We moved into the home in the latter half of March and were busy placing all the pots through April. Sure, I did some re-arranging like I always do, but most of the pots are in the location where they started out here.

Is there more severe acid rain here near the airport? I rarely notice airplanes at all. In fact, I noticed far more airplanes when we lived near Wright Patterson Air Force Base (WPAFB) , so I don’t think that should factor into any affect on my hypertufa pots.

Meanwhile, I think I will change my recipe to a stronger Portland cement-based mix. I will start mixing in a ratio of 1:1:1 with the hope of having a stronger result and less deterioration of my planters. I sure don’t want to lose any at all.

And yes, I have had some crack and fall apart, sad to say. It could be a result of the problem that I have yet to define, or a result of some damage in the move. We were careful to place them where the least amount of jiggling would occur, but the move was a 30 mile drive and there could have been some stress occurring which didn’t reveal itself until an ice/snow heave started at this time of year.

Maybe some who resented carrying those heavy suckers were less than gentle? Hmmmm…could be.