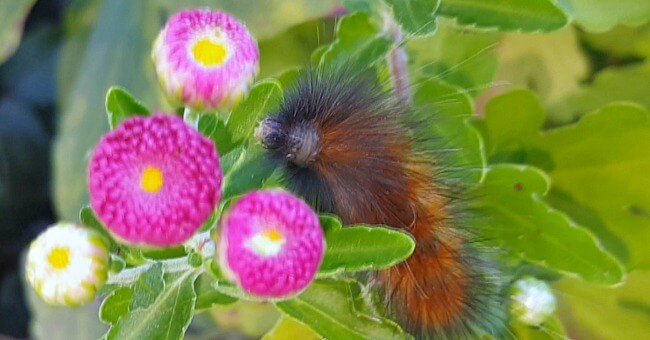 Do you believe that a woolly worm can predict weather ?

Last year, I wrote about woolly worms weather prediction in this post, but it is hard to judge whether the predictions came true or not.

For last year, the 2014-2015 winter, the woolly worms seemed to predict accurately. We had a typical winter with off and on snowstorms of which some had  pretty deep and long-lasting snows. Our temperatures didn’t seem as low as they had been the previous season, but maybe my recollections were affected by having to replace our heat pump during the previous winter.

Yeah, can we say huge bite out of the savings account. But that’s what it is for, right?

But this year, my daughter and I began to look for our little prognosticator in October.  I don’t think any of the photographers and videographers from Animal Planet or National Geographic need to think we are going to take over their jobs. It is so hard to film those little woollies.

First of all, you see them all around and tell yourself ” Hey, this is perfect. Let me get some footage of these woollies.” So you get the camera and get ready to shoot…………….

Hey, where did it go?

They can move fast when they want to and are gone under a leaf or into a crack somewhere and there goes your plan. But I did manage to catch a few on film.

Don’t Crawl Up My Arm!

You wouldn’t believe if there had been a video of me when I found a woolly bear  on my front porch one late afternoon. I thought “This is perfect but there is better light out back for the video. So let’s get her moved out back on the deck.”

OK, now I like bugs. But I don’t like them ON me. So I go get a rolled up sheet of newspaper  so that I can flick her up on it, and then walk to the back door with her to film on the deck. Well, I get her on the newspaper  and head in the front door, and she is crawling quickly across that paper toward my ARM. Twirl around and back out the front door I go and set her back down.

I kicked off my flip flops and decide I will need to make a run for it…..and let’s not tempt fate and try it in flip flops. Bare feet will give me more traction. So off I go.

Well, on the third try, I made it. Hint: Turning the newspaper upright, she keeps crawling upwards (most of the time) and won’t get on you. So if you can flip it carefully, she won’t be able to crawl on you.

I got her on to the back deck and that is where I filmed her on the green table. Took her a while to “wake up.” A defense mechanism is to roll into a ball with all her bristles out and lie there until the predator goes away or spits you out?

My daughter and I chased woolly bears when we could find them on patio umbrellas, concrete walks, into chrysanthemum bushes…..and even across patio tables.

And since these were all just brown/orange with almost no black…………I am happy to predict that it will be a mild winter. Yeah, that’s my weather prediction.

These weather-predicting woolly bears have 13 body segments and each segment represents a week of winter weather. Dark brown or black is bad weather and the lighter golden brown is milder weather. Starting from the head, I see a minor amount of darkness, and then the rest of the woolly bear is light brown. So that is why I believe she is predicting a mild winter.

For what it’s worth.

Here are the winter weather predictions based on the Festival in Banner Elk, North Carolina. Their winner predicted a milder winter also.  http://abc11.com/weather/woolly-worm-predicts-snowy-then-mild-winter-in-nc/1042115/

We had a lot of fun chasing down our woolly bears for this project. It was all for fun and no woollies were hurt in our quest for knowledge.