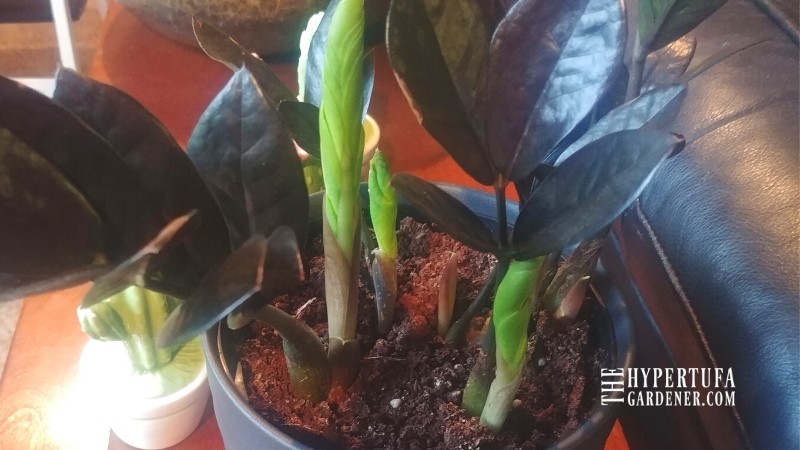 My Wish List Plant that I got several months ago is growing so well, even better than I expected it to do. But the ZZ Raven new growth is green? Is something wrong? Is it reverting back to a regular ZZ plant?

The plant I am writing about is the Zamioculcas Zamiifolia Plant that is usually shortened to ZZ plant…Gee! I wonder why? I have two large specimens of the typical green version, but more recently got the Raven variety. Such a striking color!

Getting it in late September 2020, I am surprised that it has grown so much in just a few short months. I can only hope that it is liking the light and moisture it is getting. Perhaps it is in the right place for now. My ZZ Raven is in an east window but setting back from the window by about five feet.

My ZZ Raven originally had about seven stems or stalks growing and it seems to have quickly increased it stems, now counting at about thirteen in total. That’s really good growth for this time of year. (Sept to January)

But the ZZ Raven new sprouts are green? Is this normal? I was determined to find out since I love this plant so much and don’t want to “lose” the dark deep shade of green that is almost black.

Yes, the new growth will come bursting out of the soil in a vivid green color that is so pretty in contrast to the older dark Raven stalks. This is absolutely normal and those sprouts will darken as they age.

The new growth resembles the green of the regular ZZ plant but seem to be an even brighter green. Of course, I feared that mine was somehow reverting back to a regular ZZ (which would still be beautiful), but I was anxious to keep the dark green/dark purple hues of the Raven.

Overall, the plant seemed very healthy. As I explained in the post linked above, there were a lot of stalks already growing and since now I had about thirteen stalks, I know the plant must be loving the new environment.

And to add to the visible proof of the suitability of its new home, the nursery planter itself feels “bumpy full” because the rhizomes were getting bigger and bigger. These seem like round potatoes just visible under the soil ( and sometimes pushing above).

Can I Propagate ZZ Raven From The Rhizomes?

The easiest and quickest way to propagate a ZZ Raven would be to carefully dig in and pull out one of the rhizomes with its attached stalks and leaves ( the round potato-like underground stem) and plant it into another pot. The resulting new sprouts with be light green but should turn dark eventually.

Sometimes your pot of ZZ will let you know it needs re-potting or divided. My ZZ Raven came in a nursery pot with the dark charcoal outer cache pot. It was a little difficult to get the nursery pot out of the cache pot because that inner pot was SO FULL! It fit so tightly that I knew I had a lot of good growth.

Sometimes you can feel the outside of a plastic nursery pot and it feel almost lumpy and bumpy due to those rhizomes pushing against the edges. Similarly I have a Foxtail Fern which has the rhizomes and those pots can swell to bursting. Sure let’s you know you have a good grower!

How Long Until The Growth Turns Dark?

I am watching mine as it grows and I will definitely give some feedback when I see my stems and leaves mostly black, but it seems that it may take from six weeks to a couple of months for that change to occur.

Happily I really like the contrast color of the two growing together, so I don’t mind waiting. The source for this time period for the change of the ZZ Raven’s new growth color change gives a lot of great information.