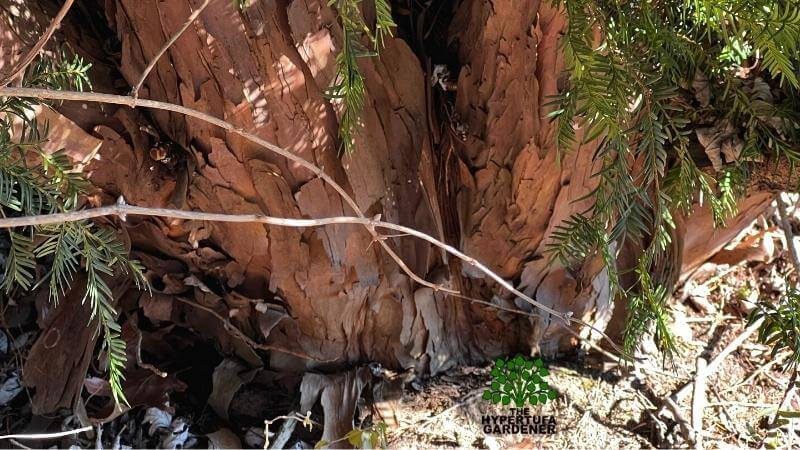 I have a large Yew Tree (Taxus Baccata) in my back yard. It is so large it must be a Taxus baccata that was planted when the house was built in 1962.

This Yew Tree in my backyard is about 20 feet tall and 20 feet wide and has a form like a huge mounded shrub. I don’t know if it has ever been trimmed or not, but this Yew does have many branches or trunks growing at its base.

If my Yew Tree lived to a few hundred years old or even a thousand, what would it look like then? According to my research, one of the ways of estimating the age of these trees is done by measuring the girth or the circumference of the trunk.

If my Taxus is branched, how would I decide which is the “main” trunk? And I certainly do not expect to live long enough to see the tree trunk large enough to sit inside!

What I Learned About Yew Trees

Surprising to me, the whole tree is toxic if eaten except for the tiny red berries or arils. But you can only eat the red fleshy part because the pit or seed inside is toxic too.

Birds and some animals do eat the whole berries, but the pit passes through their digestive systems whole thereby scattering seeds in the droppings.

The Taxus baccata is often associated with graveyards but it is debated whether these ancient trees were planted around the graveyards of the churches, or the churches were built in and among the trees.

The Druids supposedly used the Yew Tree groves as places of worship or gathering. So perhaps churches were built at those sites because that is where people were used to going for worship. Who knows?

The branches of a yew tree are very “bendable” or pliant and they made the best wood for longbows. One of the sources I researched said that yew trees sources were depleted making longbows during periods of unrest or battle and yew had to be imported from Europe.

Note the color of the wood which is a very beautiful reddish brown. I can even see that on my Yew Tree in my yard. The bark is almost scale-like and flaking. I am really loving the look.

Also observed on my Yew Tree or Taxus baccata in my backyard are some small beginnings of flowers for spring? Or are they the spent seeds still hanging on the tree?

I can’t find any photos on the internet that are quite the same, so I will watch and observe myself for this Spring coming.

While I work to find someone to clear out this rear yard overgrown property line, I will watch the Yew Tree and hopefully it will be mine and I can preserve it.

Even if some pruning is needed to keep it, I think it would be a beautiful tree to preserve for our little home here and for future generations if they can wrap their minds around respecting this ancient tree.