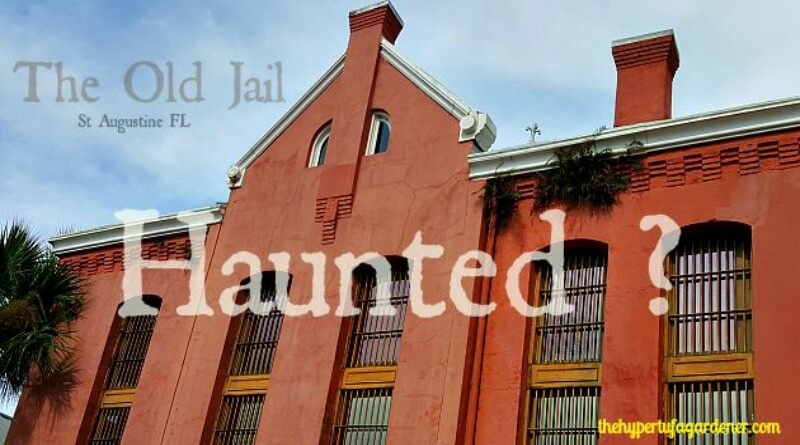 While on vacation in St Augustine Florida

My whole family went on a tour of The Old Jail in St Augustine. Built in 1891. Prisoners were executed there. They were hanged there. Yes, we actually spent time in this depressing and tragic place but it was one I had seen about on a TV show and we all were interested in seeing it.

Located within a lot of huge trees with the Spanish moss hanging gave it such a haunted look. My video taken while we were there showed us some of those “orb” things that those TV shows talk about. I didn’t even know they were on the film until we watched it later.

Is it haunted? Well, there are stories about that….   I realize that this subject is really not what I usually write about but it was so interesting, and based on the time of year, I thought you might like to hear about it.

The Old Jail is one of St Augustine’s attractions. We were certainly intrigued by the thought of going to an authentic old jail which hosted haunted tours, and paranormal investigations have been filmed there for the SyFy Channel’s show Ghost Hunters. It really sounded interesting. And scary.  See www.historictours.com

As a youngster, I always liked the ghost stories and haunted house tales. Like any kid, something that makes you scream loud enough to wet your pants was funny!

How many times did I race around in the dark yelling and screaming when someone jumped out at me?

Unfortunately, as I have gotten older, I don’t like those films about hauntings and ghost stories as much. Maybe because I wonder if spirits are truly there on the “other side.”

Watching over me….. Or watching me.

See, it can go both ways. Am I right?

The Old Jail was pretty from the outside and looked like a regular home or even a church in some ways. There was a man giving a tour who told us about the history and how Henry Flagler had built the jail and wanted it to be beautiful to fit in with the area it was built.

It had been an “open air” prison, meaning that the windows had bars but no glass. I can only  imagine how the conditions were in there. Toilets were just buckets and you toss the contents of the bucket out the windows when you had to empty it.

The sheriff Joe Perry lived here with his wife and two young daughters. A portion of the building was divided into rooms which seemed sunny and bright compared to the darkness of the prison area.

But living just a few feet from all the convicts ? I can only imagine how dreary that would be. What a place to raise your daughters. Could you wake up each day and your view in the back yard was a gallows?

But what I want you to see is my video I made with my phone camera. It is an Android Samsung Galaxy S6 and it takes great videos and great image shots too.  I use it for a lot of my photos. I also have Samsung digital camera, but I didn’t even bring it on the trip since my phone camera works just as easily for me. And easier to carry around.  Here is a newspaper report about orbs. http://www.dailymail.co.uk/femail/article-469849/Is-proof-spirits-DO-exist.html

So here is the video. What do you think?

The appearance of orbs in photos and videos has been explained as just being dust particles or lens flares etc. But there are so many opinions that you really can find information out there to fit any idea that you might want or need to believe. See (Update: This referenced site does not exist anymore. Sorry.)

Orbs are also known as “ghost orbs” or “spirit orbs” and are often thought to be the souls of people. from www.angelsghosts.com

When we planned our tour, I wanted to be sure to take photos and videos when we were there so I could see if I captured anything. So I am just leaving it all up to you. See the video and dismiss it or it may be something to prompt your curiosity.

I know that when I was inside this building, I did not feel afraid at all. The men and women who lived or died there are long gone from this world. But the place did give me such a feeling of great sadness and loneliness. Maybe despair. But since it is the only jail or prison I have visited, those may have been my expectations anyway.

I am just presenting my video for you to see. It is getting close to Halloween and this kind of scary thing will be in our thoughts. Just look at it with an open mind.

Dust particles? Souls ? It’s up to you to decide for yourself. Watch it in the dark, full screen…Even now I have the heebee-jeebees when I watch it.