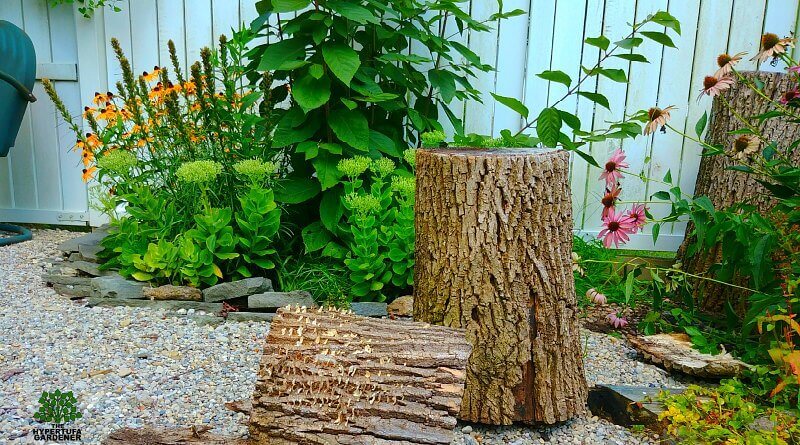 Stump removal has become a problem at my house and garden. I begged my husband not to include these in my garden. He wanted to use them as pedestals to set hypertufa planters upon. I didn’t think it was a good idea, but he insisted.

Or was it the other way around?  Oh yeah, I think it was me who wanted them as planter pedestals. My bad.

I have been putting off the stump removal but it is time to take care of that. I don’t want the weeds behind all these stumps to go to seed and make things worse in the garden. My method is to pull them loose and roll them out of the garden and down the hill. We have a slight incline the to backyard, so sometimes they even roll where you want them to go. Imagine that!

I guess I should explain that these are sawed off tree stump pieces which I rolled into the garden beds and had my son place them. Sick of them now and they grow so much fungus!

I have a lot of stumps from a tree removal we had done a few years ago. Of course, I am teasing about my husband wanting them in the garden. I was the one with that idea. But it seemed good at the time. At least they have dried out some and are a slight bit lighter in weight now. My son struggled to get them into the garden for me. I feel guilty about that. But he knows his Mom.

Behind one of the tree stumps was a vine growing on the wooden fence. If you are like me, I am cautious about vines, especially since there is a lot of poison ivy growing around here. Virginia Creeper grows here too, but I always think I need to take a second look before I find myself shoulders deep in Poison Ivy rash!

I had earlier written a post and filmed a video about recognizing Poison Ivy, so I referred back to it and made the decision that this was Virginia Creeper that was growing on the fence.  As I said, it never hurts to be cautious even if you think it is one or the other.

As you see in the video, the Virginia Creeper had grown into a pretty substantial vine and was working its way attaching suckers to the wooden fence. Can you hear that weird little “pop” as I pull it off the fence? Those little sucker feet really have a strong grip.

It is good that I removed it when I did because it would surely take over the garden in no time. My garden is small so I don’t have room for that vine.  Besides, there is a lot of Virginia Creeper in the woods out back so it can stay in its own territory. The birds bring enough “deposits” of seeds as it is.

Those tree stumps were great rolling down the hill in the video. I guess I just have to keep my husband from having weird ideas about bringing things into the garden. Yeah, that’s my story and I am sticking to it.