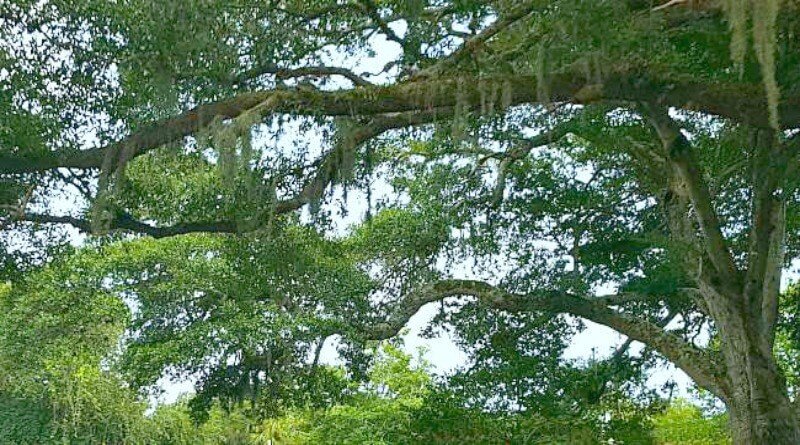 When I think of a long and humid afternoon in the South,

sipping the mint julep, and waiting for Ashley or Rhett to come calling, I just know the Spanish moss is a’hangin all around me, right?

It is a love/hate relationship.

Spanish moss is not even a moss. It is an epiphyte or “air plant.” This plant rests on another plant but only for support. It gets its nutrients  and moisture from the air around it. It is NOT a parasite stealing from the host plant. I saw so much of it on our trip to Florida.

Spanish moss or Tillandsia usneoides is a perennial with tiny curved needle-like leaves entwined almost like chains. It was gray most of the time, but turned a soft green when it was moistened by rains or any moisture.

I think the sight of Spanish moss either makes you think about a romantic Southern garden surrounded by live oaks  or crepe myrtle. On the other hand, at late night, with those long tendrils hanging, it brings thoughts of hauntings and vampires and bats or spiders. Basically, for me, it is either “I love it” or ” I hate this stuff.”

These trees with their hanging beards of Spanish moss seemed sinister with the contorted trees looming over us. But this photo was taken at the Old Jail in St Augustine and those trees, well……they overhang the gallows there. Yeah, see what I mean?  It depends on the mood of the location, I guess.  I wrote about that visit here.

We also saw ball moss or Tillandsia recurvata which is the same type of plant, but grew in a cluster or pincushion-like spray. I shot a short video of this ball moss growing in a tree. It was in patches or balls all over the tree. Here is the video of that tree.

I think I might like to get some of these plants to grow as houseplants. Here in Ohio, I would not be able to grow them outside all year. But maybe I should put some out there and see what happens to it when it freezes in the winter. Supposedly, it is very tender and would be killed but I would like to see how it would grow through the year out on the deck.

Since I live in Ohio, I don’t have to deal with the Spanish moss or ball moss, but I do find it really interesting and pretty. But those who live in the south and put up with it are maybe not so enthralled with it?  Some feel it kills their trees even though it is not really the direct cause of the death of the tree.

Some tree owners feel that the weight of the moss hanging from the branch, especially when it is wet, causes older branched to fall. It stands to reason that the trees themselves would be more susceptible to wind or hurricane damage since a lot of moss could affect the tree’s wind resistance.

I know how people feel about their old trees, and those live oaks are so beautiful in form, it would be heartbreaking to lose one or more. I know the heartbreak of losing old trees.

Enjoy your day. Fall is on the way!