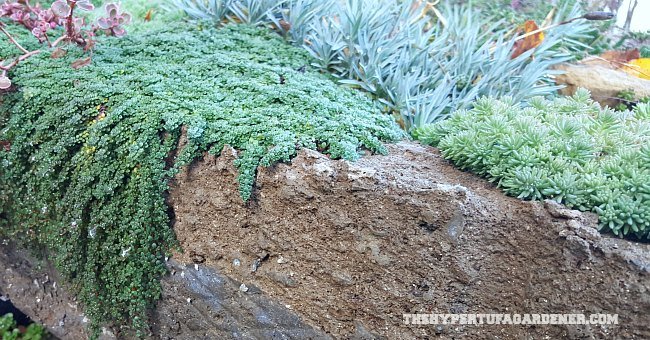 I had to plant up just a few more!

It had to be done!

So I did it. I brought more tender succulents that I had intended to just sacrifice to the cold weather.  She looks very content in her new planter which is a clear glass bowl for inside, and the hypertufa planters for outside. Hopefully I can provide all of my ladies enough light in the upstairs window or the basement grow-lights and they will survive with a reasonably good shape to set outside next spring.

As for the outside hypertufa planters, I have pulled apart the individual semps and placed them in the soil in my containers spreading them  out so that they can develop some good roots anchoring them into the soil before the real freeze occurs. I want them so be ready to produce their little chicks in the spring.

I had wanted to use one of my draped hypertufa containers as a holding pot for a sweet potato vine to bring in for the winter season. But after closer inspection, I see to many aphids on it, so I don’t want to bring them inside with the rest of the plants. I can get a new sweet potato vine next year and start fresh.

This glass bowl was planted up with a lot of the tender succulents: Ghost plant, elephant bush, calico kitten, sedum sexangulare (?) And even the little mimosa seedling. It was doing so well. But it became a victim of “male roughhousing” in my daughter’s living room. Dad swept up the dirt and glass, and sadly, all the plants and threw them out!  He saved the stones…………..the stones!

Let’s weep a bit for all those sedums which would have stayed alive in a shoe box for weeks until they were replanted.

I mixed my soil about 50% sand and turkey grit to be sure that the roots can spread well. I mix my soil in a bin and keep it ready for planting anytime. The potting soil that is in the pots I have purchased usually seems very high in organic filler  and I have to put a lot of grit in that to make it suit my needs.

I am still working on the cleanup of my garden and have a lot of hypertufa planters to re-arrange. Yes, I am constantly re-arranging them. But since the weather is so nice, how about let’s make some more! I can always use a few more hypertufa pieces.

A few of the plants are sprouting up new growth like this veronica or speedwell. It looks so fresh and bright in the garden. I had peonies next to it on the left but I have cut them back and put a half-moon of fencing around the spot so I don’t lose it for the spring.  In the past, I have forgotten where things are, so I try and mark them now.

I have been cutting and snipping at this Graptopetalum paraguayense  or Ghost Plant. ( How appropriate this near to Halloween.) I have so many cuttings which are going indoors in various containers ( against my better judgement). But she is just going gangbusters and wanting to keep growing. Those tiny bits of new growth are appearing , showing me how determined she is to live. She will probably die by the time the weather gets into the 20s. But she is colorful and healthy looking now. What can I do with her?  She has survived a freeze.  I must bring her babies inside, right?

And I have some blooming penstemon which has scattered seeds across into a group of variegated lilyturf. I could almost think it looks  still like summer, except for  a scattering of leaves beginning to fall. And my small sempervivums always look fresh and colorful this time of year, especially after an all-day rain. Gotta love them!

I am dreading the time change coming in a few weeks here in Ohio ( Nov 3), because it cuts out part of the day. It will be dark so early and I really hate that. But the morning will lighten up earlier so maybe there is some good to be had. It is especially nice to take photographs in the early morning light, right?

Have a wonderful weekend!