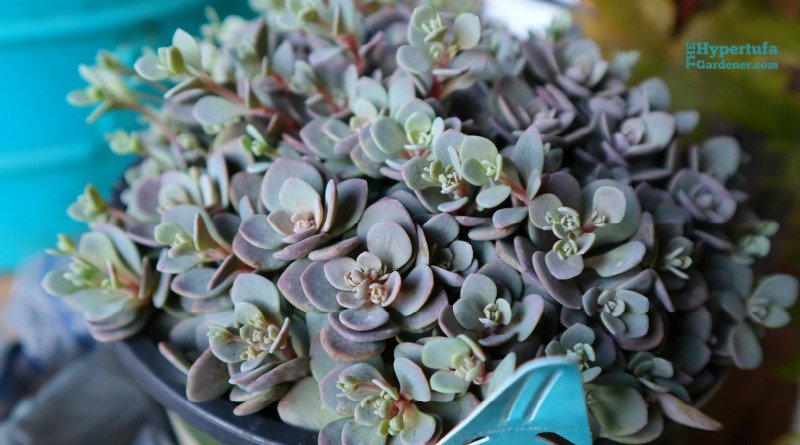 Recently on a quick stop in Lowe’s Garden Center, I bought a plant that I had not seen before. It was Sedum Sunsparkler Blue Elf. This lovely blue succulent looked like just the type of plant that I love in hypertufa Why you ask? Because it is lower growing, mat forming, and then it blooms too!

I had to look it up when I got home, but found out that it grows to just about 3 inches high and spreads about 18 inches. That should fill my round hypertufa bowl nicely. In fact, I had been looking for something to put in my large round hypertufa bowl made from beach sand.

Where Can I Plant This Succulent?

Some sources say this plant is “herbaceous.” so I am thinking that it will grow like a Sedum “Autumn Joy” which blooms in late summer and fall and then will die down to the grown during winter snows but come back up early in spring. I will expect that and not feel like it has died on me next spring.

This is a Hybrid Plant

Sedum Sunsparkler Blue Elf is a hybrid plant that is a cross between familiar succulents. It is part sedum and part Orostachys. I have quite a few of the Sunsparkler Series of plants and they all have such beautiful colors. I posted about some Orostachys that I used to have a few years ago. Mine were very tiny plants.

I had the nursery pot with the Sedum Blue Elf sitting under the overhang of the porch for a few weeks while I decided where to plant it. During that time, you can see by the photos that the plant was “reaching” for the sun. Even though it is very sunny on that porch until about noon, it was not quite enough sun for this plant.

When I was searching for care information about my Blue Elf, I came across so many plants with a Blue Elf name. Are they running out of names for plants? Just a few examples.  I think that last one looks like my plant. Does it have another name?

Sedoro “Blue Elf”  (This almost seems to be the same plant as mine.)

Did The Full Sun Treatment Work?

As you can see in the video, my Blue Elf straightened up considerably after being in the full sun for a day or two. I don’t see any sunburn or any ill effects on her so I will leave her on the deck. At this spot, she will get full hot sun until about 1-2pm after the sun goes over to the other side of the house. That should be enough to get her all tight and straight again. Looking forward to her blooms!