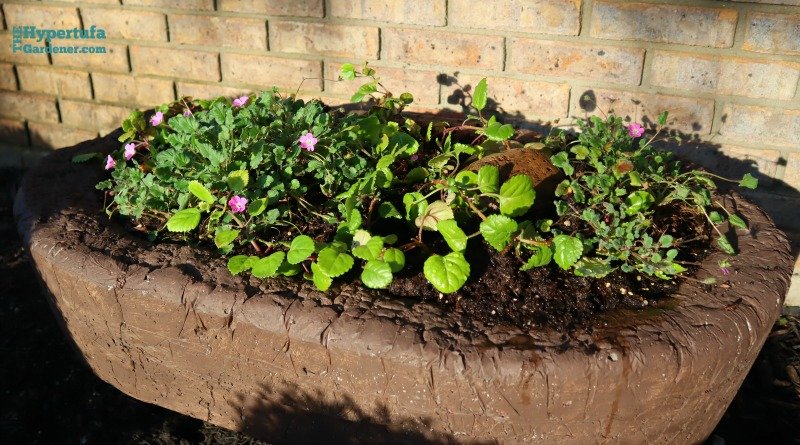 My Moss Tufa, the giant hypertufa trough that I wrote about in this post, is not looking as well as I thought it should. Most of the moss had changed to an orange color and had long strings hanging up off it. Not real attractive to me and not the look I was going for originally. So I came to the conclusion that it’s time to Replant My Largest Hypertufa!

I have thought about it a lot and I am sure this is what I want to do. The moss hasn’t looked as good as I thought it would and I think it was just too big of an area to expect to look good all year long. Springtime seemed to be the best time for it. Especially during the coldest part when temperatures were still freezing in the nights and only getting above freezing in daytime.

Choosing a new design to replant my Big Moss Tufa (Come to think of it, I have to think up a new name, don’t I?), I am ,of course, needing to plant something like a groundcover for that soil top. That’s what the moss was to do.

Here are some of my choices from the plants I already have:

I have not grown the Peacock fern or Golden Club Moss outside of a terrarium, but it would be interesting to see how it behaved. Even the Golden Club Moss would be a new experience. The Large Hypertufa Planter is in a partial shade location that gets some late sun in the afternoon when most of the heat of the day is over.

Ultimately, I decided Erodium would do well, I’m sure since I have had it in the front garden hypertufa planters before. It blooms all summer long and stays small and creeps along the top of the soil. Perfect for this yard-long hypertufa planter.

But perhaps some Baby’s Tears with it would just be a nice understory for the visual from above.

Let’s Get This Replanting Done

I planned to take off the top portion of the soil in the planter, removing all of the mosses and liverwort that was growing there. Of course, I may have missed some of it and if mosses grow back, they shouldn’t be a problem. I will just pop them out.

Don’t really know about the liverwort since I have not dealt with it before. Hopefully I haven’t introduced a Garden Thug to my planter.

As you can see in the video, I have removed the top portion of the soil in the removal of the existing plants. Refreshing the soil includes checking the hypertufa planter for soil impaction too. I am adding poultry grit for a good topping and drainage.

Decision for the New Creeping Tufa

I think I have decided to go ahead and plant Baby Swiss Geranium in my Large Creeping Tufa aka Moss Tufa. I have such a huge amount that I have kept over the winter and I just decided to put it down into the center of the Creeping Tufa and let her go!

If you noticed, the Erodium is very crowded in the terrarium and is probably suffering because of that, so once I get her planted, I will feed her and hope to see her spread her wings. You will see in the video that she did that. She has been in the terrarium for far too long.

Replanting For Later in Summer

As it turned out, the Baby’s Tears did not do well this year. It could have been the dryness of the summer, or they were just spent from growing all year in my basement garden shop under lights at a neutral temperature of 62°F so putting them outside just was more than they could take.

So I decided to put some Swedish Ivy out there since it grows well everywhere (knock wood). These are rooted cuttings that I took from another plant and they have rooted quickly. Seems like I will have a full hypertufa after all.

I have noticed that the Baby’s Tears are perking up a little. Maybe they just needed a bit of help from another growing plant with them. It could be that they want to grow with something else besides Erodium!

I will enjoy my Large Hypertufa Planter (what do I call it?) until these plants freeze out here in Ohio. I will probably take some cuttings to make more Swedish Ivy inside my house for winter. I haven’t decided if I will take the Erodium in or not. Growing and blooming all year is probably hard on it right? But can I let it die? We shall see.