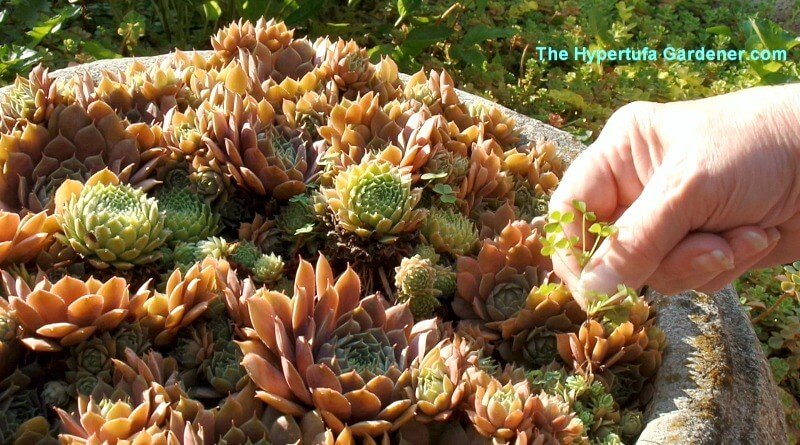 Is there a garden chore you hate the most?

Speaking for myself, that would be removing weeds. I hate that chore and try my best to prevent weeds and keep them from coming up. But, as in all gardens, they come. Quicker and faster than I can manage them. So it becomes a constant battle.

I have cut down on a lot of my weeds by changing over to gravel pathways.  And I use vinegar spritz on the weeds in the gravel when they sprout through. I have used Preen to prevent weeds seeds from germinating by pouring it into the gravel paths. I seems to have worked pretty well since I don’t seem to have as many weeds as previously.

But those pieces of purslane will find a way. Just drop a piece and you will know what I mean.

I am soon to go on vacation for a week and I dread coming home to see what has happened to my garden in my absence. I am NOT going to hire someone or ask a friend to weed my garden. That’s not me. I just will plan on a thorough job of removing weeds in the days before we leave.  And when I get home, rinse and repeat!

I am excited about leaving but I will miss my garden. I will have my son come over to water the pots not reached by rain. He will also have to do more extensive watering if there should be a few days of no rain. But most of my things are drought tolerant, so I don’t feel we should have a problem.

Removing weeds – but Leaving the Flowers

As everyone has heard many times, a weed is any plant growing where you don’t want it to.  I guess that is generally true. But I have some flowers growing where I wish they hadn’t, and I don’t consider them weeds. I have some Great Blue Lobelia growing in the rear of the yard near the small creek or run off which sometimes has water in it.

I LOVE those plants, but they are plants growing where I don’t want them to…..Does that make them a weed? Absolutely not!  I just have to deal with having them back there. I have to prevent that area from becoming a bike jump ( I have a grandson.)  Or mowed over. ( I have a husband.)  There are lots of wildflowers there and I like to see them bloom in the summer. Just like that Butterweed bloomed in the spring. That one earns a title of “weed” more than the others.

I hope you like this video I made. I guess I really can’t say that it is a tutorial for How to Pull Weeds. But I thought you might like to see how I tend to many hypertufa pots and planters and also the weeds ( unwanted plants) which pop up through the gravel.

If I keep the vinegar sprayed on the weeds when I first see them, I don’t have them as big as they are in the video. I could lie and say that I let these grow purely for a weed-pulling demonstration, but you all would see through that in a heartbeat.  Sometimes you just don’t get a chance to get out in the garden to pull when you need to, and you certainly pay for it later.  Did you see some of that purslane!

*My post contains affiliate links which earn me a commission if you make a purchase. Thank you for supporting my website.