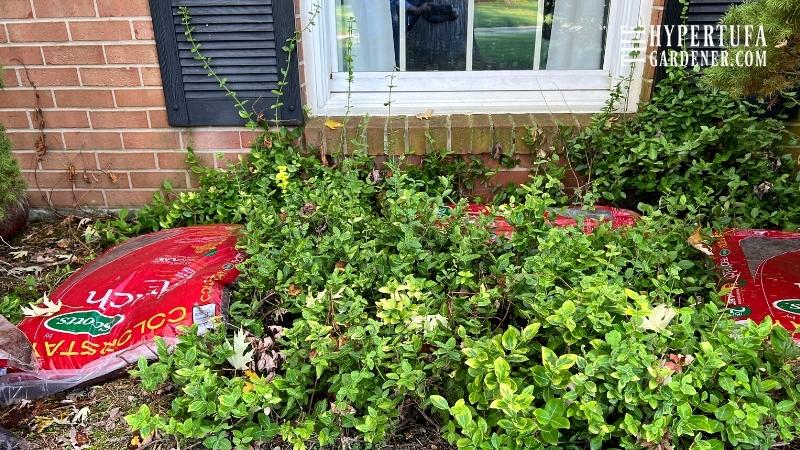 During this late summer and fall time, I am tackling a job that I have dreaded here at the new house…removing invasive wintercreeper and its buddy vinca. These plants have fully taken over most of my beds around the foundation of the house.

The look of vinca vine is pretty and it has pretty flowers in the spring, blooming along the whole vine with a pretty periwinkle blue. Its common name is periwinkle or myrtle and it is pretty, but since nothing seems to bother it at all, it quickly takes over.

But growing right along with my vinca, I have a beautiful and colorful wintercreeper also. I think most of mine is Euonymus fortunei . It appears to be “Emerald & Gold” variety or some of it could be the “Emerald Gaiety,” I am not sure. Beautiful plant, very colorful and bright, but Oh! how she grows!

As I explained previously in the video https://youtu.be/3AkK32l9ZeA, we purchased this home from the original owner and, as she aged, she was less and less able to take care of her plant borders and beds, until they were completely overrun by Garden Thugs. So that means I am removing invasive wintercreeper and vinca since they’ve taken over everything.

There does remain some peonies and I would love to think they would survive all the upheaval I am doing to their garden beds, but the peony foliage looks very brown and dead now at a time where they should still be showing healthy green foliage. (No frost yet here in SW Ohio.)

I will watch for them to come up next spring and hope that I am rewarded. If not, I will really mourn their loss since they could have been there for almost 60 years.

Also in this bed are Bush Honeysuckle, not the vines. Ohio is an area where this tree is taking over forests and yards if left on its own. I will be cutting this down and also treating the stump with a herbicide to kill the roots. It may take years of repeatedly cutting and treating, but this Bush Honeysuckle takes over if not kept under control.

It does have pretty red berries that the birds eat, but the berries of this tree are not as good for the birds as those berries on the native honeysuckle. See a full explanation in this article. https://ecosystems.psu.edu/research/centers/private-forests/news/invasive-species-highlight-bush-honeysuckles-not-for-the-birds.

My method for removing the wintercreeper and vinca is not easy. It takes a lot of work and I am doing it in stages. First of all, it has to be pulled out by its roots. No getting around that. It had to be done. Best done after some rainfall because you need to reach the roots and pull up as much as possible to prevent regrowth.

Sometimes these roots are so deep and buried well, they just don’t pull up. We have “group raked” in bundles and sometimes that works to get a whole sheet of it at once. But mostly, we have found we need to pull as much as we can, and then use large loppers to cut the stubborn ones.

We spread mulch over the cleaned bed, and since I luckily have no other flowers or plants in those areas, I will pull each little sprout is it rears it head in the mulch (or spritz it with some glyphosate or straight vinegar). Once I feel that most of my wintercreeper is gone, I will be ready to plant next spring.

What About That Poison Ivy?

As shown in earlier videos, I do have a problem with Poison Ivy in some parts of my beds and I am slowly getting a hand on control and eliminating that. It is still there and attachments are still visible on my brick walls. Not sure how to get rid of those but probably full face mask, gloves, tube socks and glyphosate comes into play here.

I understand that even the dead vines and leaves and these root suckers attached to the wall will still be full of the urushiol which will cause the rash and itchiness. If I feel like I have been exposed, and in this cleaning of beds I have no way of knowing, I will always discard my gloves when finished, wash hands in cold soapy water with Dawn detergent, rub alcohol on my hands and forearms and ankles if they were at all exposed. Treatment with Tecnu (#affiliatelink) is a good choice too.

My Flower Beds Are Looking Good!

By next spring, I should be ready to get flowers planted in these beds so that they will truly be a “flower bed” again. Meanwhile all my hypertufa troughs will occupy these spaces and hopefully grow well over this winter period coming.

It will be fun planning over the winter what plants I will put in the beds. So far, I only have some heuchera that I bought from my old house over here. It is doing well. But I need more perennials to join them.

Looking forward to browsing all the catalogues and garden blogs to get lots of ideas about what to plant!