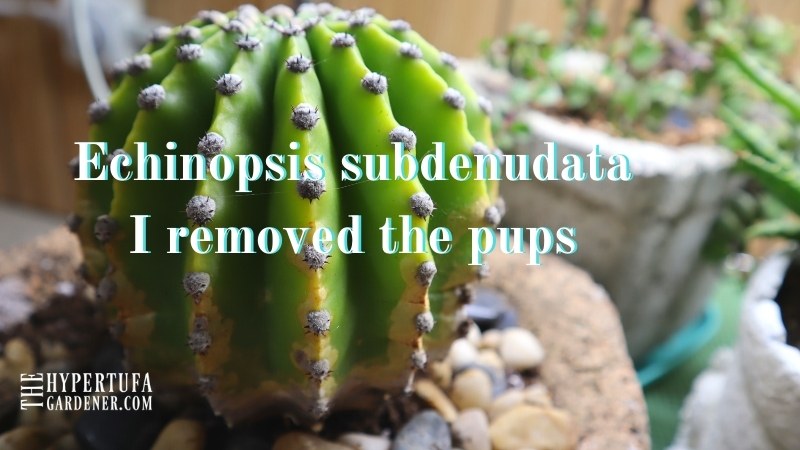 Truly, it is very disappointing when my cactus doesn’t bloom. I want to see those beautiful large blooms next spring, so I am removing Echinopsis Cactus pups in order for the Mother Cactus to build herself up and get some blooms in spring.

I think that should help her to rest a little, instead of having them partially live off her, plus she can know that no more babies or cactus pups are there and feel the need to make some more flowers or make more pups. Hopefully flowers. I want flowers!

Of course, she didn’t make flowers for me before she had these pups, so I don’t know if one follows the other. But I will keep my hopes up for flowers next spring 2021. Wonder if I will get some?

One of the YouTube watchers on my channel Kim’s Gardens identified my Cactus as an Echinopsis subdenudata “Dominoes.” When I looked it up, I thought it did look like that variety, but mine is sort of a skinny version, not as plumpy and lush looking. Too drained making pups?

It will be easier to identify when (not if) flowers bloom as that color and shape will help to narrow down the varieties that bloom like this one.

How Should I Care for This Echinopsis?

First of all, I have mine planted in hypertufa which give it a well-draining environment to live inside. Since hypertufa is so porous, air can circulate to the soil and moisture will diffuse out of the soil so that it is never sitting in water.

It should be allowed to dry out thoroughly and watered deeply when it is dry almost to the puckered stage. This seems to work for mine very well since it puts out so many pups.

Sun is great for a cactus but it has to be introduced each year in gradual stages or it can become sunburned. I have a very sunny deck until about noon, and I find even the morning sun can be too much for my plants.

During the winter, I have to bring my Echinopsis inside since the Ohio winter would kill it. It can be grown outdoors in USDA Zones 9a to 11b, but I am zone 6, so it comes inside under grow lights. My basement temperature is approximately 60°F year round.

As you will see in the video, I allowed the plant to dry out completely and then pulled the pups from the Momma plant. These pups had long roots so they were trying to live on their own already but there just wasn’t enough room.

Once I removed the Echinopsis pups, I planted them within a few hours. Typically if you are separating cactus pups from the Momma plant, you would use a sharp clean tool and cut them away. The typical procedure is to lay them aside and let the cut edge callous over for a week or more until you really have a hard callous.

My Echinopsis Pups had been attached for so long, they had already developed roots that were inches long (some as long as 3-4 inches), so I felt that was just not necessary to go through any long wait. Plus there was no fresh-sliced edge either.

My fault for taking so long to remove them.

As you can see, I have five in this container. It is hypertufa so I will keep an eye on it to make sure they get situated upright into the soil. It is late in the season, but I will probably feed them with a very week solution even though they are freshly planted in new rich Cactus Soil.

I count 9 or maybe 10 in this hypertufa pot but a few looked a little beyond dried up. So they may or may not recover. But I should have a whole family of little Echinopsis by Spring 2021. At that time, I will transplant into each one his own separate hypertufa pot. Gives me an excuse to make more hypertufa planters, right?

Wish me some flowers on the Big Momma next spring, will you? I really want to know what hers looks like. If I have the name right, she is also called Easter Lily Cactus and it would be awesome to have those beautiful flowers!