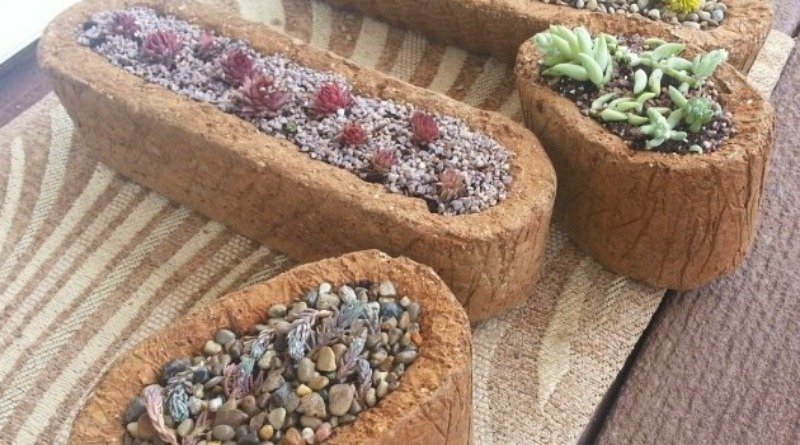 I have made four new hypertufa pots.

After curing and leaching, I needed to plant them up and I have waited to decide what I wanted in those new hypertufa pots. I have quite a few plants which are spreading well, so I need to decide what goes where.

So I’ve decided to use some of the assorted cuttings which I had rooted in a long narrow planter which stayed outside all winter. It was buried in the snow and at times, frozen under about five inches of ice.

During the winter months when I came out to check on my garden, I would look at that pot full of cuttings and think “This just won’t make it.” You could see the green and red cuttings through a layer of ice as if you were looking through a deli counter’s window.

One particular container was about 12″ deep and my soil inside was about 7″ deep and I have a layer of small pea gravel on top. It may be about the final inch of top dressing. Ice and snow would fill it up and then a thaw would leave ice standing. A sleety rain would put the icing on the cake, so to speak.

Viewing those succulents frozen in a block of ice, you couldn’t help but think “They’re gone.”

But you must have faith in those hardy succulents that survive in zone 5-6 in Ohio.

So I will gather everything together and I  plant some nice looking hypertufa pots with all the cuttings from newly grown plants this year. Succulents multiply so easily, I always have more new plants to put in the new pots.

I had some Sempervivum which were looking a little ratty, so I have decided to plant them into the new hypertufa. These hopefully will make some new chicks and I will have lots more by the end of the season.

Most often, these need to have the bottom brown leaves removed and then just poke the stem into the dirt. If they were fresh and all green, I would cut and then leave them to scar over for a day or so before planting.

I made up my soil mixture using a large part of poultry grit which is ground granite. These are very tiny pink coarse rock which gives my soil a very porous and free-draining texture.

I use a section of a coffee filter as my liner. Sometimes I double layer the filters depending on the size of the container. I have also used vinyl screening  as a liner over the holes, usually on a larger container.

The final results were very pretty. I liked them all, but now I need to go make more!

Got any ideas for me about how to plant a new hypertufa pot?