Have you heard the discussions back and forth about whether hypertufa troughs should be over-wintered under shelter or left to nature ?  Well, I had heard that and last fall I moved almost all my bowls and troughs  under the deck overhang. This was to keep them from being too moist in the snow and sleet and all rains during the late fall and early spring period.

Well, based on being a bit of “If I can Avoid That Job, I will” philosophy, I have decided I WON’T move mine next year. I will leave them out in the weather and let nature take care of the planters. They will get the snow and rain that comes, and the best and strongest will survive and make it through the winter unscathed. The “scathed” ones…..sorry.  It is a survival of the fittest world.

The reasoning behind my decision is that my bowls and troughs under the deck overhang are just not as healthy looking, and bursting into new spring growth as those that wintered  out in the graveled garden bed. Yes, the soil in them is wet and soggy after many  day’s rain, not to mention the snow melt.

But look at the difference in a protected seedling bed and the one buried under ice and snow trough? I have healthy, plump, spreading growth already. The sheltered ones look like they are the “before” pictures for some  Plant Food.

My back thanks me, and especially  my husband and son’s backs thank me.  Now I just have to get this Fire pit Hypertufa Dish back out in the garden. ( I swear this will be the last time guys!)……. 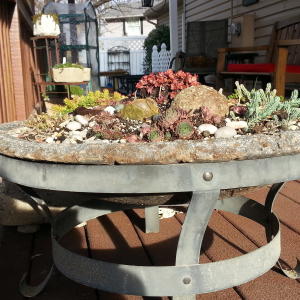 Shh! I may decide to move it somewhere else later. Maybe after a good supper of chicken and dumplings? LOL