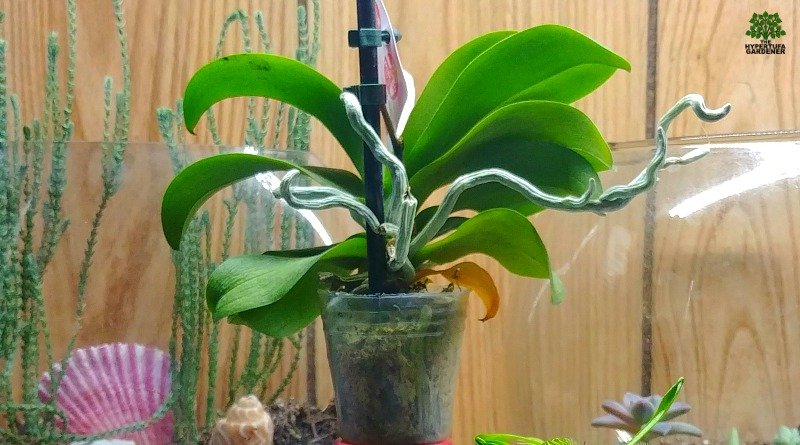 I need to learn about Orchid Flower Care and I need to learn it fast! You see, on a recent plant shopping trip, I found a poor neglected tiny orchid plant in a little pink ceramic pot. It was marked down to $3 and I was tempted to get it. But I thought to myself  ” I don’t know anything about orchid flower care.” But as I cruised down the other aisles, I thought about the poor little thing and how neglected she was, so I went back and got her. I rescued an orchid!

Maybe I could look at this two ways. Either she died fairly quickly from dehydration if I left her there, or I could take her home and try to learn how to care for her, thereby prolonging her life ( read that torturing her) and see what I could do. Who knows? Maybe I could eventually have her flower. It would be pretty now, wouldn’t it?

Those of you who know orchids maybe can tell by the first photos that she was too far gone anyway when I got her. But I didn’t know that and I will try and see what I can do.

The label only says “Orchid Phale” so when I go to the Internet for info, I see that she must be a Phalaenopsis orchid.  According to the American Orchid Society, she is commonly called a Moth Orchid and is one of the easiest orchids to grow. Wow, I lucked out on this one, right?

Since she is so small, I am assuming she is a mini-orchid that can be used as a party favor or for tiny tea cup vignettes. That tiny plastic cup she was in is only about 2.5 inches wide at the top.

My Video of My Orchid Flower Care

I made a video of my first attempt at taking care of my orchid. First of all, I did water it just enough to dampen the moss-like stuff that was in the little cup it was inside. There were a few dried flowers caught in those air roots ( things dangling), so I just threw those out. I don’t remember any kind of spike on the plant at all so I hope that means that there was not a spike that I was supposed to save where the next flower would have bloomed.

Following the instructions from ChicagoBotanicGarden on YouTube, I have cleaned out the roots and the small cup. My orchid’s leaves seem to be healthy, though they looked a little withered at first. Hopefully I can keep it alive long enough to know if I am giving it good enough Orchid flower care in order for it to bloom. Orchid bark is the medium I am using to plant it. Any advice about using that is appreciated.

I pulled out all the spaghnum moss packed around the roots as CBG said it was there for packing/shipping purposes and would hold too much water for long term. But in their video, she put a little back into the bark mix, so I am not sure if I should add a little of it.

Another source for info on YouTube was MissOrchidGirl and she has some really detailed videos about orchid flower care.  I will use the hydrogen peroxide spray she recommended and hope that I get good results.

One bit of info on the AOS.org site said that it could bloom a few times a year. I don’t think I will get my hopes up. But one of those pretty sprays of flowers that last for several months (it says) would be so nice. I may have to wait a year or more for that, but I will try and be patient. After all, my succulents take forever to bloom too.

Wish me luck. I have flushed her through with water now and I will see what happens.  All the bark is damp and she is settled under my grow lights with temps about 65-70°F. Not much humidity down there. Should I set her on a dish of pebbles and water?

This may be harder than I thought.