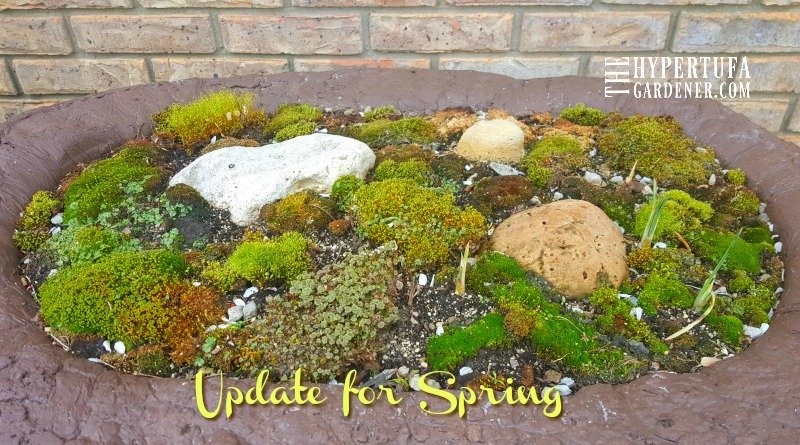 Time for an update on my Large Moss Hypertufa that I planted last fall. As I planted it, I included a lot of varieties of moss for gardens that I found in my yard and in the fields around here and I think it has turned out really nice.

I have had a few instances where the birds seem to have disturbed the moss. They will peck at it, probably searching for a bug to eat. But they will usually toss a clump aside and when I find it, I can return it to a bare patch. We’ll see if this continues.

I wrote about it previously showing some of the brown edges and I still don’t know why they turned brown, but some appear to have slowly greened up. Now whether that is normal and that particular garden moss turns brown in the cold and then greens up on warm weather, I am not sure. But I am glad that it did.

Those tiny plants that were star-shaped have sprouted into small plants during the cold February and March and started blooming tiny white flowers in the snow. They were very cute but not what I wanted to “swamp” the moss in my hypertufa planter, so I pulled them out with tweezers and needle-nose pliers (great weeding tools) over a period of a few days. Sometimes bits of moss clung to the roots of those plants and I disturbed the cushions of moss, but I like the look better now.

I am not sure what the weed is but some of it looks like chickweed. Does chickweed have little “nodding bells” type flowers? I will need to do a little more research to figure that out.

My small dwarf iris have come up on one side of the moss crevice garden but not the other. It may be too early, but I am worrying that the other end planted with anemones (Grecian windflower) will not come up at all. If not, I will try again next fall. Or not, depending on how these come out this year. Perhaps I will be content to just let it be moss only?

But here is the video so you can see how it looks just now. Weeds mostly have been removed but I can see a few sprouting here and there. Probably will fight hairy bittercress and creeping charlie. But I hope to get them when they are tiny….and before they bloom and seed!

There is a lot of liverwort in the hypertufa planter, and some of the plants that I think are mosses may be a type of liverwort called leafy liverwort.Â  The other mosses I can only guess are some kinds of cushion moss or pin cushion moss and rock cap moss which is described as looking shaggy , but “burns” in sunlight and turns brown. Hmmm.

But I think it will be nice watching this grow all year. I will try and give you some frequent updates.