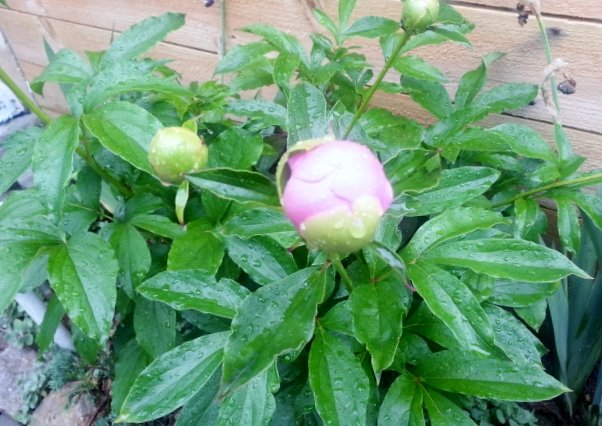 I have such fond memories of peonies.

As a young girl about eight years old, I remember living on a small farm of about six acres. My family lived here and raised a lot of vegetables and fruits and just a few animals. Dogs and cats and a few calves. I guess calling it a farm is stretching it a bit. We gardened there, and as a kid, I really didn’t enjoy it. It seemed to me back then that all we did was weed the corn, beans, tomatoes, onions, and nasty stuff like okra and cucumbers.

My brothers and sisters and I spent many afternoons picking bugs and worms off the plants. Ewww!  And I remember planting potatoes and then digging them.  It seems my Mom and Dad could always find something that needed to be done in the garden. Work, work, work! And I remember breaking beans. Bushels and bushels.  And let’s not forget tomatoes! With big worms on them. I know they were as big as my arm! And mean looking!

And my Mother canned so much in the late summer. I had to help boil bushels of tomatoes and then dump them into ice water and, surprise, the skin just slipped right off !  My Mother canned enough food to last all the winter. We had a basement and there were shelves lined with jars full of food. And a huge box full of potatoes.  There were seven to feed. I had five brothers and sisters.

I recall getting up early in the morning and going to a place called Mumma’s to pick strawberries. What a wonderful memory that brings  when I smell strawberries!  I love the smell of strawberries in the early morning mists.

But raspberries or blackberries, not so nice. I know we picked in thickets close to Xenia and that was in early morning too. And that was the worst. Those whip-like canes of the blackberries and raspberries were thorny and little tiny snakes were always waiting to scare you on one of those canes! And then we’d take them home to make jelly and jams. It was really good to eat. My job was to wash and wash and wash jars endlessly….no dishwasher back in those days for us.

And we even ate our animals too. Daddy  brought home three little calves once and we were so happy.  We named them Homer, Jethro, and Jody. I liked taking care of them. Mixing up a formula and feeding them from a bucket with a big nipple sticking out from it.

Funny what you remember as a kid.  They got bigger and fatter, and one day they’re gone… But the freezer was full of meat. I think all five of us fussed and cried. But we ate our burgers, and roasts, and steaks. But Daddy never bought any more cattle to raise. ( I think he liked those pets too.)

And that brings me to Mrs Rapp, our neighbor lady who lived in the next house down the road. She was probably about the age that I am now, but to me she was old. ( Yeah, your ideas of “old” sure change as you age. It’s called perspective.)   I remember they had a farm about the same size as my parents, but they also had chickens. Mrs. Rapp was the typical apron-clad grandma with her white hair in a bun. When we were allowed to go walk over to her house, she would be baking cookies. Oh, those heavenly smells. And this lady grew flowers too. She had such pretty flower gardens and all those colors and scents were wonderful to me.

My birthday is in June, and each year she brought me a bouquet of peonies and roses. These were my flowers and I put them in a vase and sat and smelled that wonderful scent and drank in the beauty of those flowers. Is that the seed she planted in me to make me want to garden? It’s possible.

I am not sure why she brought me those flowers, but it could have been my wide-eyed wonder at the beauty I saw in her garden. We only grew vegetables at my house, except for the occasional sprinkling of marigold seeds.  I was the oldest girl, but I had two younger sisters and a little brother. But on my birthday, she always brought me roses and peonies from her garden. She was the sweetest woman and probably never knew how much those flowers meant to me. I was a very shy and backward child, but when I got those each year, I felt Special.

I know I thanked her for them. But I wonder if she knew how much her kindness and thoughtfulness meant to that little girl?

I think she did.

“Don’t you wish you could take a single childhood memory and blow it up into a bubble and live inside it forever?”
― Sarah Addison Allen, Lost Lake