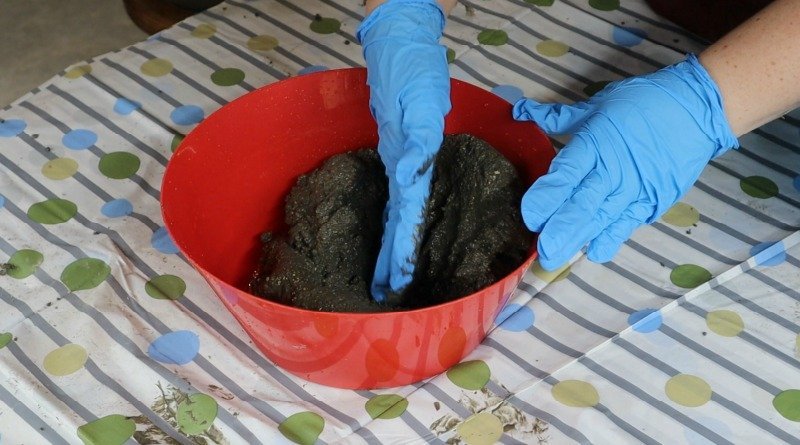 Several weeks ago, I accidentally made a Marble Hypertufa Pot. Well, it had an outer texture that was very smooth and shiny like a piece of marble or polished granite. This happened in a marathon hypertufa-making binge that I did last month. Of course I was surprised by this and wonder how it happened and why it happened. And mostly how can I make another one?

Why did it make marble?

Over on our Facebook Group, The Hypertufa Gardener Group, we discussed this and various answers were proposed. One of the main considerations was that I used a mold with a SLICK inside.

Defining what I mean as slick, it had an inner surface which was smooth and slick, even shiny. It almost seemed like glass but this original mold was a flimsy nursery pot that I just grabbed as a mold.

When I tried to duplicate that process with a slick mold, it didn’t work out. It came out as an ordinary hypertufa texture. Don’t get me wrong. I love the ordinary texture of hypertufa, but since the marble texture was so striking, I want to know how to get it when I want it.

Conclusion: A slick mold by itself DOES NOT make a marble texture.

Did using too much water make it marble?

I know that when I came up with the original marble mold, I had put a little too much water in the mixture and had a real “slumping” problem. If you have made hypertufa, this is when the mixture does not want to stick to the sides of your mold but keeps sliding down or puddling/slumping against the bottom. This is why a lot of us hypertufa makers use an inner form inside. It helps hold up the sides from slumping plus gives you a nice inside area. I admit some of mine get sloppy inside when I don’t use one, but since it is buried under soil, it doesn’t matter to me.

So I tried a hypertufa pot making my mixture with just a little too much water but that didn’t give me a marble hypertufa pot. It was just the same surface as I usually have on my pots.

Conclusion: Too much water by itself DOES NOT make a marble texture.

How about my Release Spray?

I tried making a pot in a slick mold both with and without the spray lubricant. Some people just smear vegetable oil or other lubricant so use whatever works for you.

This method didn’t make any type of marble hypertufa pot. I just had an easier time getting the pot out of the mold when it was sprayed compared to the pot which wasn’t sprayed. It was hard to get it out of the pot unsprayed and that is an aggravation that I don’t need!

Conclusion: Use or non-use of the lubricant spray DOES NOT make a marble texture.

How about Length of Time Left in Original Mold?

Perhaps a small detail that may or may not matter is the length of time I left the piece in its original mold. For my first accidental marble hypertufa pot, I left it in the mold for several weeks. You see, I had made the batch of hypertufa before we left on vacation and I just left it all wrapped to cure. We were gone for a week and I know I had made it a week or so before we left. Plus after we returned, I never got to get to the unwrapping stage until we had all settled in. It is possible it was in the original mold for over 3 weeks.

Could this have made a difference?

I am glad to say that I have created another marble hypertufa pot. I haven’t done enough experiments to be sure, but it seems to me that a combination of TOO WET and LONG FIRST CURE gave me a marble texture.

This hypertufa pot mix was very wet, as you see in the video. In fact, it was so wet that it leveled itself out in the pot due to the moisture “seeking its own level.” I got lucky and mixed just the right amount of hypertufa mixture so that my mold was completely filled. This was nice since it kept me from having to sand off or grind off the sloppy edges. I don’t know about you but sometimes my edges are just so sloppy and that creates extra work.

See what the new one looks like. It is almost the same marble texture but without some of the defects or holes that the other one had. I think this was probably due to the liquid-like mix I had and I also jiggle/tapped out the bubbles to try and get a nice surface. I had only a few minor defects in this one.

In retrospect, I wish I had put a larger pot inside so that the sides were not so thick. These marble hypertufa pots are so dense and heavy, I could get by with a thinner wall. Not too thin, but just right.

So what do you think? I will keep making pots in my regular fashion, but I think I may use of bit of mix each time making a marble pot just to test out the theories. I want to see if the major difference in texture is the water. I think that may be the most important underlying reason for a more marble texture.

Maybe it would be a good seller for those of you who sell. Who knows?