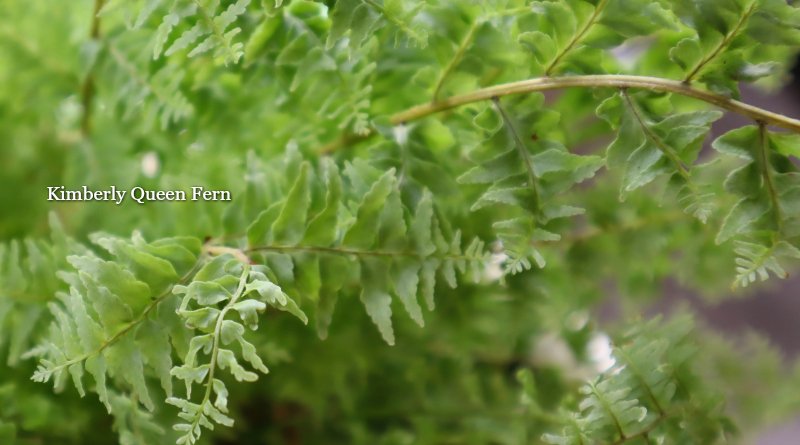 I have had a Kimberly Queen Fern as a houseplant for over a year and I really think it is an easy houseplant to grow. First of all, I started mine outdoors on the enclosed porch as a hanging plant, so it has been an outside and an inside plant. Outside I provided it with a lot of bright light but it was shielded from the hot morning sun by the wall of the house.

However, I had it planted in a glass bowl, a fish-bowl type bowl, which is supposed to be such a NO-NO for plants like this. Drainage issues and all. But I have grown a lot of plants this way and don’t have a problem.

Even though this one suffered with a lot of abuse, such as drying out (sometimes severely ) between watering and it was “available” for bug infestation since it was outside, I never really had any trouble with it. When  I found it really dry, I would just pour water into the bowl and it would perk right back up. Maybe that drying out kept it from being a hospitable environment for fungus gnats. Score one for me!

And you may want to note this idea when you grow in glass. You can SEE into the bottom of the bowl and know how much water is in it and if it is over-watered or not. I will need to make a whole new post about growing in glass.

Originally I bought my fern at one of the local garden centers. It was tiny, just a few inches tall and only cost about $3-4.  I had intended it for a terrarium bowl from the start, so that is where I planted it.

Sometimes this fern is called a Sword Fern since it has more of a tendency to grow upright. To me, this seems to give it a nice appearance since it isn’t as “floppy” but will still arch beautifully as it gets larger.  If you would like a fern for some porch urns or something similar, this would be a great choice. It is a strong and sturdy fern and can take some wind, so it does well as an outdoor plant.

Sunlight can be direct, but partial sunlight is better and it can even be planted in a shadier area or put in an area of your home that doesn’t have too much light. It won’t thrive in low light, but it will grow there.  If you plan to grow it outside, it is hardy in USDA zones 9-11. She will die in freezing temperatures.

Watering a fern is definitely something you cannot forget. ( I admit that I did several times.) Check on her every few days, and water when she begins to feel dry or your moisture meter indicates dry soil. She doesn’t like to be wet. (See why I like to grow in glass so that I can see her roots?)  Misting is a great treat for her and if you use a humidifier, she will love that.

Offsets grow up from the roots as you see in my video. I have several new ferns from the original Mom plant. Once it over-grows the pot, you will need to divide them to keep everyone healthy.

Overall, I would put this plant on my Easy Houseplant list. An occasional brown frond can be cut off at the base and new ones will grow in to keep yours lush and full.  Perfect for me!

Next spring, I think I will plan on getting two large ferns and put in some urns I have outside. I think they would look awesome flanking each side of my front door. Hmmm…As a matter of fact, having a pair both inside and outside the front door would be great.