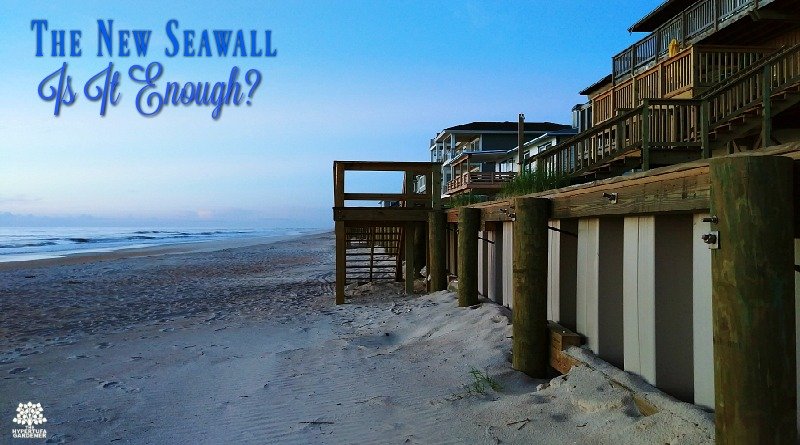 After a terrible storm like Hurricane Matthew occurs, repairs are all started right away and insurance companies and FEMA come into the area and get everyone restored to how they were before the hurricane, right?  Just like when hailstorms happen here in Ohio, within a few weeks or at most a few months, everything is back to “normal.” Or at least as much as normal can be after such devastation.

As it turns out, I couldn’t visit St Augustine Florida without making a statement and pleading my ignorance about the lasting effects of Hurricane Matthew. I could not believe that there was still so much destruction remaining ten months later.

As Hurricane Harvey ravages the coastal areas of Texas and neighboring states, and pushes inland causing terrible floods, I can’t help but wonder how that area will be this time next year. And I just had no idea that it took so long to recover.

What is the reason for delay? I don’t have any idea. Is it availability of construction crews? Delays on payouts by the insurance companies? Permits and inspections delayed? Do you have any idea what is the problem that these homes aren’t repaired after such a long time?

I have never lived in an area where hurricanes occur. But I do live in Ohio which is in the path of Tornado Alley, hit by tornadoes often. I have never been hit by a tornado and the closest area to me that was hit with terrible devastation was the Xenia tornado of 1974. Neighborhoods were wiped out and 33 people died, either directly or indirectly killed, just as Matthew was responsible for 47 deaths.

The house next to our vacation rental home in St Augustine and several more on down the beach had been badly damaged and some were destroyed by the hurricane. Our Property Manager said that the lot next to us had always been vacant, but it was exactly the size a house could fit and was now just a flat sand lot that was for sale. The house next to it seemed to me to be totally destroyed. I just couldn’t believe how the storm surge could wash away the underlying foundation of a house. But it was there and exposed for you to see.

This beach had dunes, the large sand and vegetation hill that can shield the homes from some wave damage.  (“A sand dune is a mount, hill or ridge of sand that lies behind the part of the beach affected by tides. They are formed over many years when windblown sand is trapped by beach grass or other stationary objects. … Without vegetation, wind and waves regularly change the form and location of dunes.” ) ref: https://www.des.nh.gov/organization/commissioner/pip/factsheets/cp/documents/cp-02.pdf

But that was totally wiped away. Gone!

New seawalls (see the image at the top of the post) have been built all along this beach where we were, but how much can they withstand? They are strong, but so is the force of a hurricane.

I read that one and a half million people were ordered to evacuate the area prior the the landfall of Hurricane Matthew. That seems a nightmare itself. As we left and were driving to the airport, we drove north on A1A which is one of the routes of evacuation. In the late morning approximately 9am, we were stuck in traffic several times. I just cannot conceive of the horror of traffic jams when all of these people are trying to leave near the same time. How does all the evacuation happen?

The destruction was especially bad since the hurricane made landfall at high tide. So the water was the closest it would be to the homes along the coast anyway, and in addition, being slammed by waves generated by winds up to 145mph. I think I have a new respect for those pleas for help by the Red Cross and other relief agencies.

Prior to making landfall here in the USA, Hurricane Matthew hit Haiti and more than 1000 people were killed. It is mind blowing to think of all that death and destruction.

If you have experienced any type of catastrophic loss like this and can enlighten me why the wheels of restoration are so slow, I would really like to know. I realize from reading about the aftermath of the hurricane that many people sold their properties and left. I think I would be one of those people because I don’t think I would want to go through the same thing again.

I know this is such a departure from what I usually write about, but I just had to ask these questions. Someday any one of us could experience a similar thing and I want to know what I am fighting against. Thanks so much.