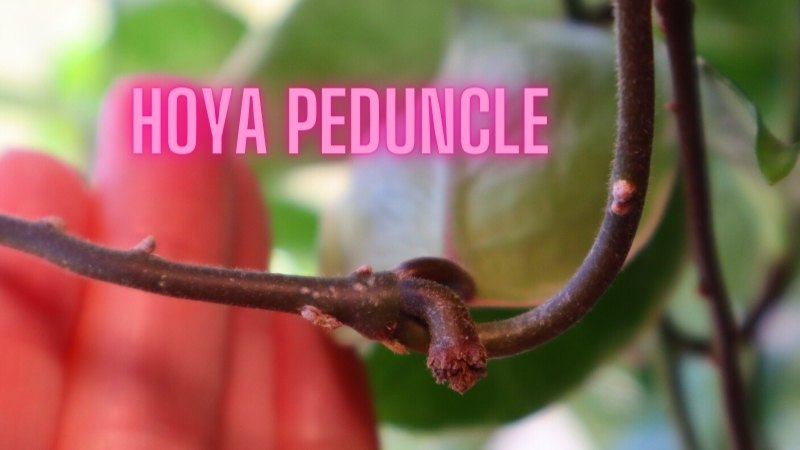 I am not any expert on Hoyas by any means, but I do try and learn everything I can about them. Recently I learned some new information (to me) about the Hoya peduncle and I thought it would be nice to share.

Did you know the Hoya peduncle displays an indication of how many times that hoya peduncle has had a blossom? Once you see the difference in a “new” peduncle, it is so easy to see the hoya peduncle growth through its successive blooms.

This photo above shows a new hoya peduncle with its first bud and dangling flower stems working toward a Hoya blossom. The arrow is pointing to the base and it is smooth there showing that this is the first time the peduncle has bloomed.

In this following photo, you can see the same arrangements of those bud stems and the area that attaches but notice the bristles that are there. Those are the remains of the prior bloom that occurred on that peduncle. There’s the reason never to remove those peduncles!

How Does The Hoya Peduncle Look ?

It is hard to tell the difference between a growing tip and an aerial root. And topping that would be the actual hoya peduncle. Until it develops, I don’t think you can be certain about any of them.

For instance, this is a growing tip there on the end, and along this branch or vine are aerial roots just behind that swelling. This vine is similar to the cutting I took and successfully rooted.

That swelling area is where new leaves will emerge perhaps along with a peduncle.

By the way, here is the latest update on that cutting which is growing very well. I have a lot of leaf development along the stem and I hope that within a few years (maybe earlier), I can have a peduncle.

I took this cutting in mid January 2021 and it rooted quickly. Two new leaves have developed and it has grown without any problems at all.

Where Does A Hoya Peduncle Grow?

In my experience, I see the peduncle grow at a spot where the leaves are emerging. A small curved stem will start to emerge and then curl slightly to blend with the plant’s other foliage.

I have only had the Hoya carnosa Tricolor ( or it may be a Krimson Queen), so I can’t really speak for other varieties. But my hoya’s peduncles grow next to the base of a set of leaves in most instances.

Sometimes a peduncle can form on the growing tip of a tendril, and then later leaves will emerge there too. You may see a “hook” growing from one of the tendrils and then see this turn into a peduncle.

Those growing tendrils are reaching for a place to attach and climb just as they would in their natural habitat growing up trees in the forest or jungle. Allowing them some support may help them grow more quickly. I plan to get a bamboo hoop for my new little root cutting.

Check out the video for a quick view of all the peduncles and blooms that I currently have on my Hoya carnosa. It seems that it bloomed really early this year. I hope it will continue to bloom through the summer season.

How Can You Get Your Hoya To Bloom?

It seems to me that a Hoya plant that is growing happily and vining and making new leaves is content enough that it doesn’t need to reproduce. It is the nature of things to go with the status quo and just carry on as it is.

But if you stress the plant, such as let it dry out until the leaves get a little “puckery” (if that is a word), then it thinks it’s in danger of dying so it wants to make a bloom and seeds so that it completes its cycle.

So I periodically let my Hoya dry out…a lot. See how puckery the leaves are? You can see it in the video and in these images.

Once the hoya peduncle forms and begins to bloom, water her on a regular schedule once she is dried out according to a moisture meter. Or put your finger down into the soil deeply to be sure if she is still holding moisture.

Sometimes it is hard to get my finger (and even the moisture meter) into the soil because my plant is so root-bound. However the Hoya does like to be root-bound and I believe it is more inclined to bloom if it is. Don’t use a large pot.

When I transplanted mine about 3 years ago, it was in one of those plastic hanging pots direct from the nursery. It seemed to be very root-bound in it and I did end up transplanting. But the size pot I used was just barely big enough to get it into width wise but was slightly deeper. This seemed to work well for my plant since it started blooming the following year.

After The Hoya Bloom Fades?

Just let the blossom fade and dry up on its own. The tiny flower stalks will gradually drop off and collect in a little pile under your plant.

As I understand in researching this, unless the plant is outside and pollination occurs with moths etc at night, there will be no seeds. The seeds are produced in a pod which grows on the plant as opposed to the flower itself.

Don’t cut off the Hoya peduncle because it will rebloom in that same spot, getting longer and longer of a peduncle. The longer it gets shows you how many times it has bloomed. It can bloom again on the same peduncle in the same season.

Here’s wishing you lots of blooms this year!