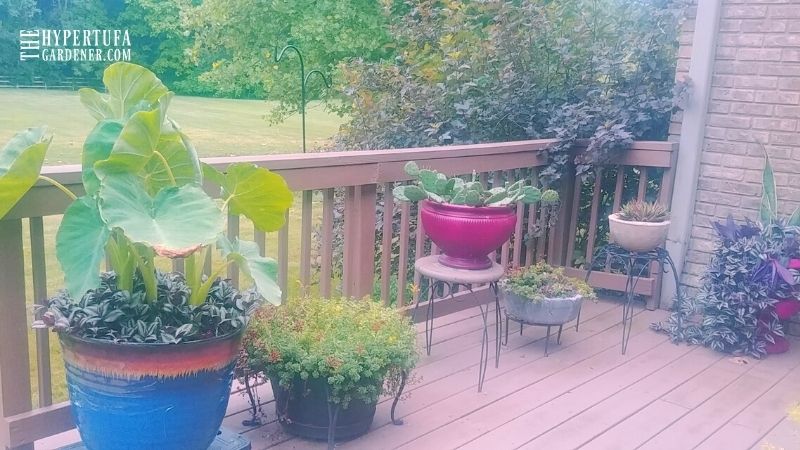 Most of you know already that we planned a move again and it has been so stressful and difficult. And I know my husband doesn’t read this blog so I can safely admit without him hearing or knowing that I HAVE TOO MANY PLANTS!

There, I said it. I have so many plants that we had to rent a large Truck. We rented a 16ft HiCube from Penske for only $60 per day plus mileage and kept it for two days. And yes, this was in addition to hiring movers to take the main bulk of all the furniture later.

But quite a few of my plants are tall and heavy and the moving companies will NOT move live plants at all (at least all the ones I contacted.) So we had to do something on our own. No one had a tall enough covered truck and we knew that Miss Fiddle Leaf Finicky would surely die whipping down the interstate on her way to her new home.

First of all, I didn’t exactly have an ideal situation for the guys moving my plants. You all know I had a lot of plants outdoors on the deck for the summer and these had to be carried or shuttled with the mower through the yard and up the hill to our “landing” strip (the turn-around spot in the driveway.)

It seemed like a good solution since those plants could all be carried through several days and then be finally loaded onto the truck when we had it ready. My son and grandson did the bulk of the heavy lifting. My husband just can’t do that anymore.

My daughter and I did smaller plants and she also lifted some of the ones that were too heavy for her, I think. I felt a little guilty about having to move all those plants. Deep down I came to the realization that I truly have too many.

Too Many Plants Resolved In Moving

It seems that nature and nurture (or the lack thereof) is taking care of some of my excess plants during this move. As you can see in the video, I had hurriedly placed the pots and plants in areas where I could. There was so much to do.

And some of the plants were rained into almost daily, but unfortunately had a saucer underneath them or some other situation that caused a quick decline.

My large philodendron was so mangled that I just gave up on it and ended up giving it away. But I have so much less room here anyway.

But the little “grand-daughter” propagation of that same Split Leaf Philodendron I had done earlier this year is going gangbusters. She liked the move! Check her out in the video with her new aerial roots just thriving!

How Did Moving A Fiddle-Leaf Fig Go?

The most finicky one I worried about was my FLF and she did wonderfully! Now someone explain that to me! She was dragged into a truck and wiggled up and down a ramp, put into a different environment, un-watered since I wanted her to be as light as possible.

I can’t believe it! She seems as if nothing changed at all for her. Growing contentedly in her new spot and showing no signs at all of any stress. Go figure that one out! ( Yes, as I write this, she’s probably in there swooning and sinking to the floor.)

String of Pearls – It Did Not Go Well

Those poor cement heads that I had my String of Pearls planted inside looked so good and were doing well. But those poor heads were put into a large bowl to carry them and then were carried here and there, rolling around on top of the strings of pearls and bananas that were planted.

Both now look a little rough and I am not sure how to treat them. Root new ones from the broken strings and start over? Or just consider them pruned and see what happens? I will need to re-pot a lot of these succulent plants that are tender.

Bringing them inside means bugs and I have to combat that the best way I know how. Bonide Systemic Insect Control Treatment. Here’s my affiliate link. If you have not tried this stuff, get some now because it works like a charm!

So Much More To Tell About The Move

I will have to write a few more blog posts to explain this move we have gone through. Things have gone well and things have turned disastrous, but at least it’s over now and we are here.

But I need to complain to someone and I guess that will be you, my readers. Thanks for listening.