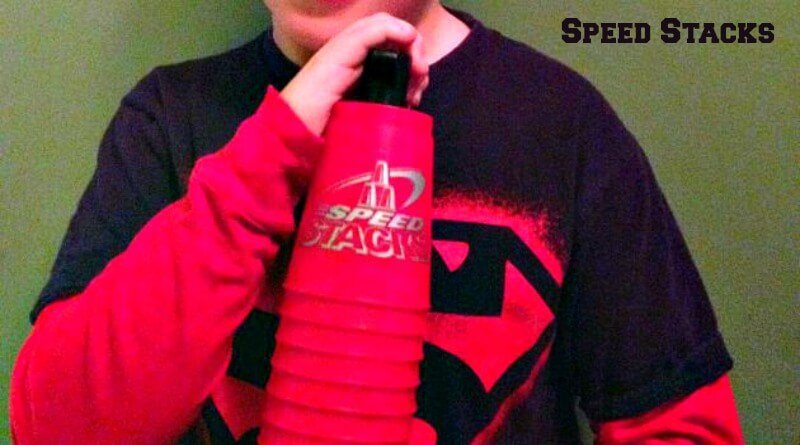 Have you heard of Speed Stacks?

Jacob was introduced to Speed Stacks in his second grade classroom. The teacher felt that this was a fun game for kids to develop speed, and agility. But along with that, they were to develop an ability to concentrate and perform quickly.

Concentration and speed is something that most second graders struggle with because it is hard to sit still throughout the school day. But he needed to learn how to think fast and do a task quickly. Such as math….yes, I hear the groans.

Speed is not his forte on his math problems.

This particular game seems to be a mind and memory skill along with the speed he needs and the agility to have your hands and arms move as fast as necessary.

He got his Speed Stacks online and they came with a “latching stem” that goes through the stack and holds them together easily. (It has a wrist strap, too) He can just plunked them into his book bag and carry them to and from school easily.

His teacher had a “Speed Stacks Club” after school on Mondays and he would stay and have fun with all the kids who joined. It was a good experience for him.

I understand this is a sport and has national and world competitions with kids from all over the country and world  performing. I have seen films where they go so fast, it is unbelievable!

Students that sport stack on a regular basis have shown increases in test scores and levels of concentration. This is achieved by students using both their right and left sides of their brain. When students sport stack they are crossing the “midline” of their bodies and developing new connections in their brains. These new connections help to spur brain growth which in turn promotes greater academic achievement.  from http://www.speedstacks.com/instructors/resources/benefits/

I think he is doing a wonderful job and he will continue to do so. I love watching him when he “gets his strut on.”  He sure has that Man Strut down!

Thanks for reading. And try them for your kids. It is really a fun game and with practice, they will make you proud. ( More Family Life posts here.)