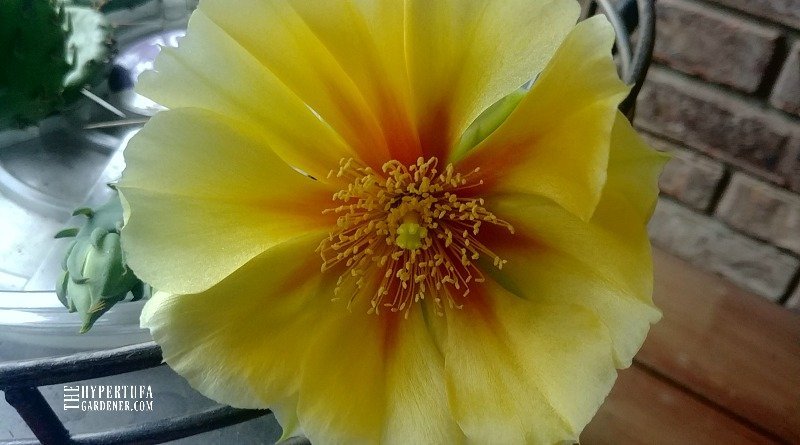 My son really gave me a lesson in being a Helicopter Plant Mom. Imagine that! He only has one plant inside his home and I gave him that plant several years ago. It is huge now and growing. But he also showed me how constantly hovering like a helicopter over my plants may not be the greatest either.

I am a hovering Helicopter Plant Mom who is always outside pinching, picking, watering, misting. And lets not get into the re-arranging part right now. But it seems like I finally get everything arranged like I like it…and then I get another idea. It’s not so bad when I am just moving the small pots and planters to a different table or area. The problem is when I want to move the huge 24″ by 16″ potted plants ( and always just after I have soaked them well with water) off to the other side of the deck. Sure I have some of them on little roller stands, but not all of them.

Anyway, I guess I learned a lesson from him when I went to his house earlier this year and happened to glance out his back doorway. There on his small patio was a cactus blooming the hugest and grandest flowers ever! What?  I hover over mine and have not a single bloom! What gives? What sorcery is this?

What Does He Do To Get These Blooms?

Of course, I started questioning him about what he does to this cactus. ( It is an Opuntia compressa, I think.)  Deep in my heart, I already knew what he was going to say, but I had to ask. What sorcery does he use to get all these huge blossoms, gorgeous sunny yellow blossoms? What special fertilizer? What great pruning or lighting or watering with the special mineral spring waters in Bellbrook?

You know what his answer was?

When or even if it rains, it gets watered. That’s it. He neglects it and it THRIVES!

These Opuntia cactus were at my son’s house when he bought it. They were in two large concrete pots almost with a cactus-prickle surface. He has lived in this house for about seven years and they sit in nearly the same place as the couple who lived there previously. Of course, when he moved in there was only a paddle or two in each pot. Now there are so many, if they drop off, he just discards them.

Of course, I started harvesting myself some “starts” with no regard to all those stickers! Yes, I paid for that for a day or two. Those invisible ones are so irritating.

Some day, I am going to have blooms like that, I hope. But I have to stop hovering.

Lessons for a Helicopter Plant Mom

Within reason, I guess I should just leave my plants alone and let them grow as nature intended. A lot of the type plants I grow, succulents and cacti, don’t need to be watered so much and I don’t need to constantly be worried and hovering, and testing the soil to see if it needs water. Just chill!

I have some plants that are in the ground and really, if I think about it, I planted them and left them alone and they have grown so much…all on their own. For instance, I planted some Geranium “Blushing Turtle” last spring, a small one gallon pot. It gets rained on and sometimes sprinkled, but has grown to a beautiful patch of blooming flowers this year, spreading about to about a four foot square. All without me Helicoptering all week long.

I have to learn to let Nature takes its course.

My new Opuntia is now planted up in a new pot and sitting outside on the deck. Hopefully, I will have as nice a plant as my son has in the next few years. I just have to Let it Be! That’s going to be hard for a Helicopter Plant Mom. But I will try my best. Watch the video and you’ll see how I planted her up!