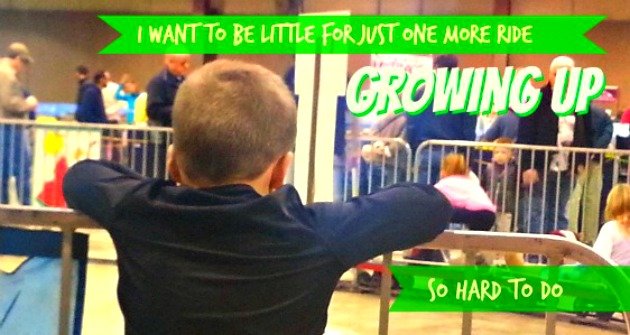 Even a 9 year old can experience the regrets of growing older.

I know it’s freaky just thinking of that, but I witnessed it myself.  I don’t know the total thought processes that went on inside his head, but if you had been there, I know you would have seen it too.

We took our grandson to a Model Railroad Display at a convention center near here. It was exciting to see all of the model railroads in different sizes. Some were so elaborate, I was astonished. Scenes of a city street with passing trains, hotels on fire, police cars, ambulances, fire engines. It was so realistic it was as if you were just Giants looking down on a city.

But there were also tiny ones which fit into a small suitcase. A whole city scene entirely in a piece of luggage. Awesome creative minds.

I don’t really know much except the sizes of these trains are usually in letters. My husband has the HO scale and I know there are many more letters going to smaller sizes into letters like N, and Z which get very tiny.

All I know is  when he gets that glassy-eyed look at a model train store or convention, I hear a loud sucking sound which is coming from the bank account.

But anyway, back to the subject of this post.

There was a kid’s ride of hand cars (I think that is what they are called) for little kids to ride and my grandson was just fascinated. All kids love those carnival and amusement park rides and ride them all summer. Haven’t all kids ridden those rides ever since they were propped up  in them by photo-taking Nanas? ( guilty!)

Jacob stood at the side of the ride watching. It was a ride for younger kids. I asked him if he wanted to ride, but he said “Oh, it’s for babies.” There were a lot of younger kids riding and it was too simple for a kid who rides roller coasters and all the big-guy stuff.

I watched him as he watched the other little kids riding, and I could see he wanted to ride. Pumping that bar up and down to make yourself go faster. Wow!

But he also wanted to be one of the big kids. It took him a long time to earn those “stripes” and be one of the kids who could ride his bike down the street…way down.  And he could play little league baseball, not T ball like the little kids.

But that day, watching him from behind, the slump of his little shoulders as he looked wistfully at that fun ride for little kids…..he wanted to be little just one more time… for just a little bit.

There is so much  those little shoulders will soon have to bear. Middle school, junior high, and then on to high school. Choose a college, graduate, get a job, a career………so much is in his future, he needs to be a little kid again, just for a moment.

So I bought him a ticket……and then another one. Just one more before growing up. It is coming too quickly.  And so he rode it right along side of the little kids…..and for a moment, he was a little kid again.

Don’t we all wish we could go back to that “little kid” feeling again. Just for a little while.