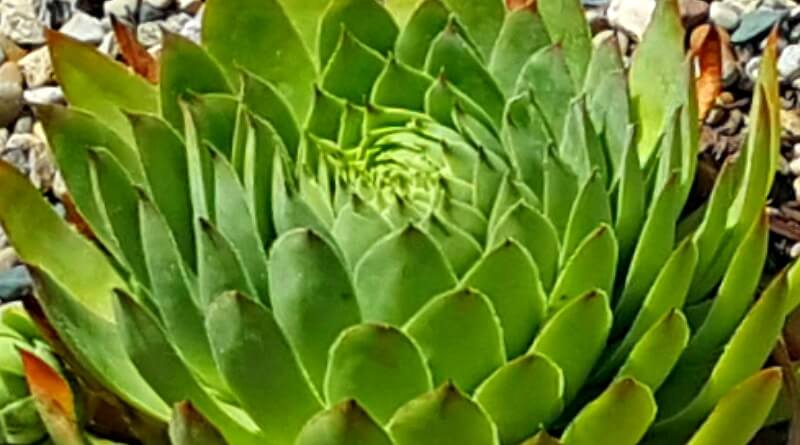 Why do they have to die so soon?

I love my hens and chicks or hens and biddies but I wish they could last just a little bit longer. I think I could be satisfied with fields and fields of sempervivums, but these wonderful drought-tolerant plants are what is called monocarpic.  ( Monocarpic plants bloom once and die.)  The hen lives a short life usually about three or four years or so producing chicks or pups but then, at some moment during the season, its middle portion starts to become more cone-shaped. This cone then starts to elongate and develop a stem which can contain many little rosette blooms all pack in little bundles. The star-shaped blooms are very pretty and attract bees all over the garden.  I have some photographs in this post where I wrote about my succulents and sedum in the garden.   And now a moment of silence for Mrs. Hen.

I received a large cluster of these particular hens and chicks last spring. These were given to me by a friend and I was so overjoyed! In fact, I had not seen any that were so huge! My Mom used to call these “Live-Forevers.”  These little plants are so easy to grow that you can have them anywhere, no green thumb needed. Look at the size of this cluster?  My friend pulled a lot for me and for the Rock Garden at the Community Center. Gardeners are like that, generous and giving. Take a look at Mrs. Hen and her many children. Isn’t she magnificent?

She was easily ten inches in diameter! And so many large chicks hung from her so I knew I could pull them off and plant  these across my garden. Isn’t she majestic?  I don’t know a variety or name to give her so she is just Sadie Sempervivum to me.  I brought her into my garden where we had just refreshed our gravel paths and made a two-tiered division lined with large stones. I knew she would be perfect to spread her chicks all along that rock edge.

As you can see from this angle of the photo, Mrs. Hen’s children were more than ready to leave the nest. In fact, they were huge too. Since these plants are so easily separated, all I did was pull at the stalk or stem which attaches them to their mother hen and Voila! I had many new plants. I hope that these are just a fertile and their mother. I set about planting them along this gravel pathway. The soil is under that layer of pea gravel so I just took the stem of the newly separated chick and put it into the soil and then arranged the pea gravel around the base to support it. The chicks are particular about not sitting in water or wetness and this was going to work great!

I probably arranged the rocks several times.  I am always making changes when a new idea hits me. But I got them all placed along the upper path with the flat stones arranged to provide anchoring and perhaps a little bit of shelter if needed. This side a my house gets a lot of sun.  It is a sweet gum tree planted there in the middle. It provides a small amount of shade now and I hope it will provide a little more as it gets bigger. Is is supposed to be the variety without the “balls.” I have not seen one yet and we have had it there for about four years.

Mrs. Hen always looked her best after some summer rains. Her daughters seem to be plumping up and growing well even though separated now from the mother hen. Some of these later pictures show how she got to be a “Grandma” before her blooming ended her life.

Mrs. Hen’s daughters seem to be doing well and producing the grandchildren I mentioned above. It is evident from the photos that there were different levels of stress during the summer months and we were through long rainy periods and then long stretches without rain.  But it is the stress that brings out the different colors and I think her daughters all look beautiful!

There is a small Erodium in the upper left of this photo. It is not really something that you would find in a sempervivum bed but I put Erodium in my hypertufa containers all the time. So my regular garden is just like a big container, right?  She is flowering and apparently very happy. Here is a post with more photos of her.

Mrs Hen was doing well but seemed to be getting tight in the center so maybe that meant she is ready to flower. It is a look you can begin to recognize when a sempervivium starts to form its blooming stalk. Cutting off the stalk will not prevent her death. It is just the cycle of life for these monocarpic plants.  Please note: There is a type of succulent called Echevaria and some of its varieties look a lot like the hens and chicks. Echevarias can bloom repeatedly but these are tender plants that will not tolerate cold weather or frost. I cannot have these in my garden in Ohio. ( You know I have issues with having to dig up plants at the end of the season and move them inside. No, I cannot get interested in Echevaria.)

Mrs. Hen aka Sadie finally did put up a massive cluster of blooms. She did very well. See that huge candelabra she made! Well done!  Those flowers are star-shaped and a vivid pink and the bees just buzz them all day long. These flowers last a long time. But Mrs Hen begins her dying process almost immediately. The outer petals or leaves dry up and turn brown and no more leaves grow to replace them. Soon the whole rosette is brown. If I had known I was going to write this post, I would have taken more photos to chronicle her life.

Her final show was great and each of those flowers will have seeds in them. The seeds are like dust and I don’t harvest them. I just take the dried stalks and shake them in areas around the Mother Hen. I think the drier part of the summer stressed her and she knew it was her last summer so she burst forth in a huge cluster of flowers. It was a great show from a great Hen. When you are growing hens and chicks, you expect to lose them. But they put on a wonderful show before they go.

I love growing hens and chicks. This coming spring, I will look forward to seeing some tiny rosettes peeping up through the gravel. These are so tiny, it is easy to miss them. But they will persevere and continue growing and making more babies for my garden. Yes, Mrs Hen…Sadie. Good Job!