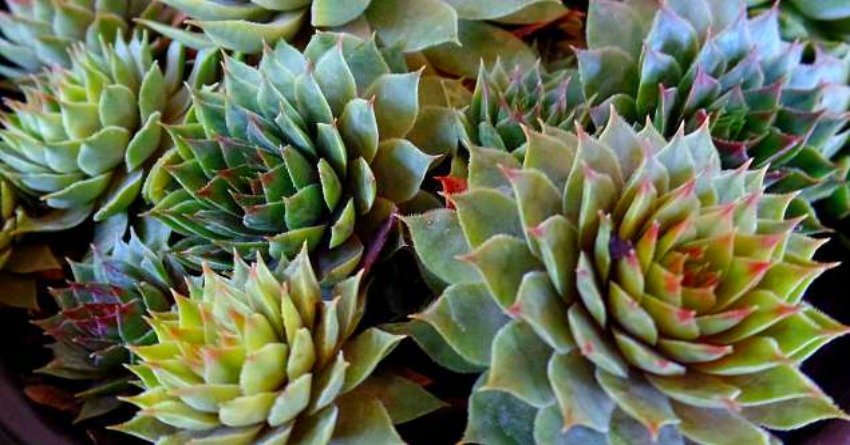 Most garden centers are getting rid of their collections of succulents and sedum, and sempervivum too. At least the hardy varieties (which are the ones I want.) These outdoor spaces are getting cleared out since they won’t be open for plants during the winter season. So they clear out the excess…..and they are on sale!

Please understand….you will not get all kinds of variety, and sometimes the plants look a little “unkempt.” But I have found some great deals that are just too hard to pass up. And most of the time, you can find a pot that looks really good.

And then I had to have another! It was a pot of semps with a Mother of Thousands in it! Score! We all know those little babies on the MOT drop everywhere, so it’s no wonder that a nearby planter would have some hitchhikers come aboard.

The least likely places are the Big Box stores since they aren’t really a garden center nursery, they are just the area in the stores where they put plants on shelves and allow them to die a slow and tortuous death…..sorry, but that is how I see it sometimes.

And it isn’t only the Big Box stores. I went to a pricey nursery here and they had a lot of plants in the spring that looked really nice. The plants are all in categories and they offer landscaping etc. This nursery is well-known here in our area.

Anyway, I also went mid-summer and was shocked at the condition of the plants. The succulent collections were neglected and dried out, weedy, and just looking terrible. I still was able to find a few that I wanted to add to my collection but it was a chore picking through the neglected tables.

I visited this same Large Nursery this past week and I was shocked. If they would have offered all the succulents I wanted for $10, I truly don’t think I would have taken them up on the offer. Everything was in bad shape, and the prices were not even that good. No “variety” either. Just the usual Autumn Joy and Dragon’s Blood. Hardly anything else.

So my advice is don’t judge until you go in and look at the inventory. Sometimes those nurseries are NOT the best places. Try the Big Box and see what they offer. I found my Erodium there!

I have been planting some hypertufa pots with the semps  and sedum I got on clearance. And I did get another  Mother of Thousands  Bryophyllum daigremontianum, also called Alligator Plant, or Mexican Hat Plant and Devil’s Backbone. It had been accidentally planted with the semps so I got a bonus plant, but I’ll  have to repot it for indoors during the winter.

But it’s a beautiful plant and quite interesting plant. I wrote about it before in this post. We have a lot of babies already, not really very big yet, but if you are like me, it is hard to pass up on a plant sometimes.

Have you had a Mother of Thousands? I think it will probably live up to its name.At least from what I have heard.

Have a wonderful Wednesday. And if you should just happen to be near any garden centers, check for Succulents On Sale! Get them into the ground (the hardy ones) and they can burst out with new baby chicks in the spring. Or spread all over and bloom!