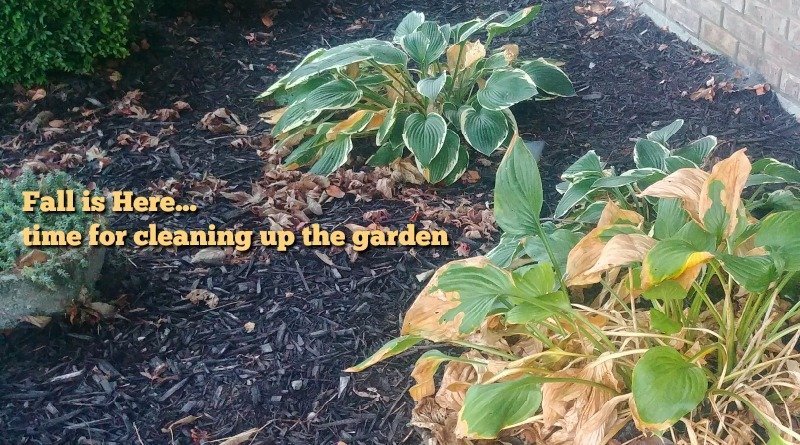 Now that the official date for the beginning of fall has passed, I need to be out in the garden cleaning up for fall and prepping it for winter. I guess we all do it a little differently, but sometimes it just comes to a matter of taste. Since I don’t care for dead plants in a heap under snow and ice, I like to clean those up while it is still nice enough weather to get out.

I have some hosta out front that we are really not too pleased with this year. It seems to me that the only time they look really great is in the early spring and during their blooming time. In the last month, they have really looked ragged and brown. I think I would like something a little more season-friendly to put in those places, so we may be figuring that out this winter and ready to plant in spring.

My rock gardens on both sides of the house are looking pretty good. They just need an occasional weeding when I am adventurous enough to try it. One side is steep and rocky and tends to roll me down the hill when I tend it. But I like the look of the river rock that is around that area.

On the other side there is the steep hill but with deep mulching there, it is also hard to walk through to grab weeds as they grow up. I am hoping to have a lot of sedum eventually take over and not have too much weeding to do there. Trimming the bushes is impossible for me to do myself, but can I trust a crew to come in here and not trample everything I have worked so hard to create?

On my south garden hill, I have had a large bush die. It was a Viburnum lantana Mohican and has just dried up and died this year. It will need to be removed. Not sure what killed it but we noticed it wilting and then a few weeks later, the whole thing was brown. It is just next to another one just like it and that one (so far) seems fine. So I am hoping it was not a disease of any kind. It has to be taken down and burned in one of our fall campfires, I suppose.

Coincidentally, that small rug juniper just beneath it has died too. Hmmm…

I am also needing to take down some overgrown hydrangea near to my garden shed. They have not done well and need to be refreshed. Since they are spring bloomers which bloom off and on all summer long, I know I will lose some flowers next year. But the bush has become brown and ratty looking this year. Wonder if the tree next to it has gotten too shady? Does it need more sun?

Weeds are still a problem and I am trying to go through and pull everything I see so that the seeds don’t disperse. Mulch will not be put down until it get a lot cooler or even cold here. I don’t think it should be put down too early.

Well, wish me luck. Weather in Ohio is still getting really hot, then mild, cool at nights, and hot in the day. So unpredictable. I checked on my hypertufa planters with spring bulbs and they are sending up new shoots as if it is spring already? What is going on? That’s not normal, is it? But should I ever expect anything to be normal around my garden?

No, I googled it and that is normal. When they are content and happy, they will grow some leaves in fall according to this source. Note: It also says they love slightly alkaline soil. What could be better for them than Hypertufa? Win win!