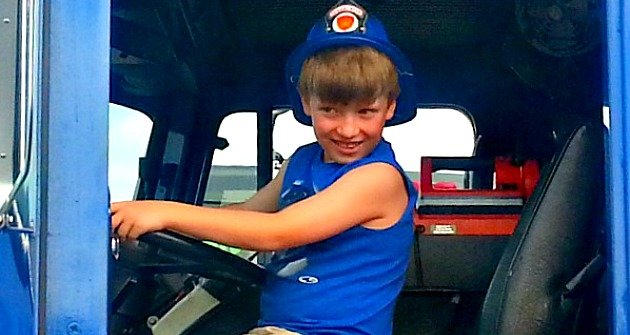 but it includes the Fire Engines and Rescue Trucks and Giant Trucks and Big Yellow Machines with Scoopers on the front….sorry, no recollection of what that was called !

Jacob looks forward to this Event each year because he gets to get INSIDE the giant trucks and machines he sees on the road. This last year he was just the right age where he could get up there by himself and be in charge. He would have started that up and taken off , I believe, if he had the chance. My daughter’s nerves were on edge as he climbed in and seated himself. She is so protective of her little man.

Doesn’t a kid always want to be up there like the Big Guys?  And what is better than controlling that big machine that the Big Guys operate?  These machine are bigger than most things he sees each day. Of course, he wants to be like these guys who are able to move those parts and dials and levers and buttons that make the Fire Engine scream down the street, lights flashing. What kid doesn’t watch when he hears it roaring by?

He always asks us “What happened?” as if we should know these things.

I can only imagine his thoughts when he is up there in the cab looking out and down at us…..we are “way down there.” He is the one who is Up There , higher than us and bigger than us. Part of this, I think,  is his fascination with moving parts, and how and why things happen, such as the mechanics of how that ladder unfolds and rises up from the fire engine.

These Touch A Truck events are a wonderful way to enrich a child’s experience of those things that are usually off limits. After all, when can they touch a fire engine and one of those large yellow “wheel loader” things?

I can remember when I climbed into a large truck that my uncle drove. Those things are HUGE! I remember the feeling of being above the usual level where the “little cars” drive. And I was a grown woman at the time. SMH!

But now he will just settle down in front of his Lego set and build those trucks and engines. Little ones that fit into his hands and can be pushed by his power. And they make the noises that his imagination provides.

Kid’s dreams are as big as they can imagine. And it will lead them into their futures. What huge machines might they one day operate?

Are your children obsessed with anything right now? I think it is sweet and heartwarming to see a child so focused, right?