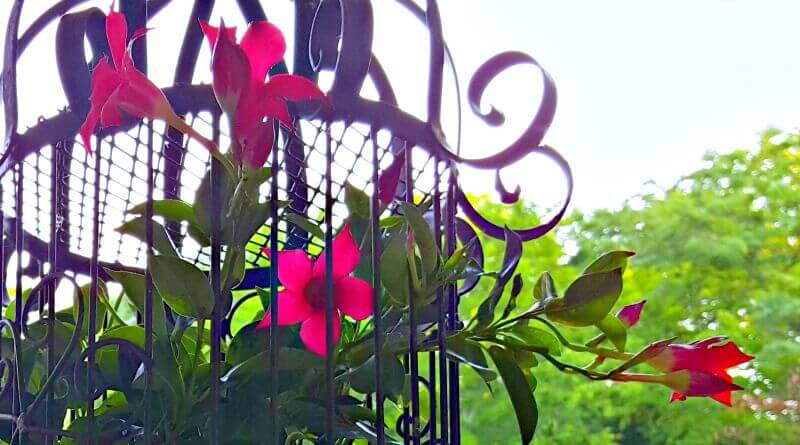 These two plants are in the same family of plants, and blooms are similar, so I have one or the other of those.  I have mine “caged” until it confesses.  I guess I am running into a common problem. The label said mandevilla, but the branding for these particular plants is for dipladenia.

When I google the plant, it seems to indicate that the names are used almost interchangeably for the same plant. Here are some links to the Amazon store in case you’d like one. I am an Amazon affiliate. The mandevilla is more of a vining plant, and the dipladenia is more a a bushy cascading plant. So I have a bushy-ish, cascading, maybe-it-will-vine plant with red trumpet flowers but not really yellow throats. Just a lighter color.

I have put it in a cage – whatever it is.

My dipladenia or mandevilla, and I am leaning toward the dipladenia, seems to be more bushy than vining. That is why I came to that conclusion. I have put it into another cage I had. It is a large black cage that I had previously used for an ivy pelargonium.

This large black cage is heavy metal hanging from a chain, but it also has feet so that it can sit on a table or bench. But I have chosen to have it hanging. On my other cage, I had used a fabric bag to hold the soil, but this one I am using a plastic planter which I tested to see if it would bend enough to get it through the door. It works.

( Just don’t plant it first! I learned the hard way and had to dump it and start over.  )

The size of pot I could force inside was a “short gallon” if that makes sense. It was pretty easy to force it through the door empty and it left a bit of area to put Spanish moss to decorate the pot and cover the plastic.

Here is what the Spanish Moss looked like. I just forced long strands on the outer edges almost to the top of the plastic planter. I will add more as it settles in.

I understand that the dipladenia flowers best if its roots reach the bottom of the pot, so I have chosen this shorter pot so that the roots can grow quickly and reach the bottom, giving me  flowers by the hundreds this season.  I know that I could take it inside to overwinter it here in Ohio, but I don’t plan to do that. I will just enjoy it for the summer.

I will hang it just under the edge of the deck roof where it will get lots of sun.  I will feed it to keep it flowering, since I don’t plan to keep it, until it is killed by frost. It is zoned for 9-11, so I think the first cold nights will be the end of it.

But it will certainly be pretty until then, won’t it?

Caution: Some references indicate that it is toxic.  Dipladenia is also known as Mandevilla. While there are no directly specific references to toxicity in cats, it is noted that ingesting the blooms or leaves in quantity can be toxic to children and pets. It would be best to keep this plant away from cats.