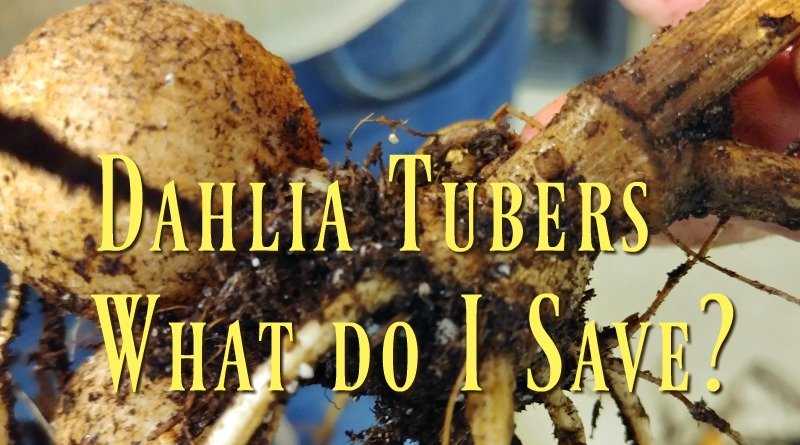 I had the most beautiful dahlia these past two years. It was the Mystic Illusion and I wrote about it on this post. This year I have made up my mind that I am going to save the tubers so that I can re-grow it next year, getting an early start on the season. As you know, we moved late in the year and in the bustle of moving and getting everything ready, we neglected the planted Mystic Illusion until it had frozen.

My daughter and I purchased a new plant this spring and had beautiful flowers all year. But we promised ourselves that we would preserve our Mystic Illusion tubers so that we could have that plant again for the spring of 2019.

We had our first frost here in Ohio in October. The dahlia plant looked a little wretched but it didn’t kill it. I think after the third frost, we decided to go ahead and cut it all down and discard all the foliage. I rolled the planter that it had grown in all year right into the basement doorway. That way it was protected from a hard freeze which would destroy my precious tubers.

Several days later, I dug out all the tubers and we seemed to have a lot of them.  As you will see in the video, I started with a spade trying carefully not to injure the tubers. But that wasn’t going to work. Then I got out a small shovel. No luck there. Just couldn’t get any traction in that big pot.

Finally using a potato fork, I managed to get under the giant ball of tubers and pulled it out. My husband helped me to work all the tubers away from their soil coating. The soil was really dry which is how we would want to store the tubers. I decided against spraying all these with water (which some recommend), but since I was running late in the year, I decided to just brush the soil away and get them stored “upside down” to make sure that all moisture left in the stem was run out just by gravity.

**I did wash one of the sections with water so that I could see the “eyes” on the crown or collar which is at the base of the connecting stem. I wanted to be sure I could see something of a bump so I could feel I was saving the correct portion. And I needed to get a photo! Hey, I am a blogger!**

After we had fully dried out the tubers using one of my plant stands, I stored them in shredded paper in a cardboard box. I have put them in a dark portion of the basement where I think they will stay cool. In general, my working area stays in the upper 60sF, so I hope this is not too warm. But in the section that the guys use, there’s an area that is our “most underground” section, so I will put them there.

Wish me luck. I hope to have some lovely plants to pot up early in the same large urn. I will also put some into the ground because I want to see how that goes. Will the critters eat them all next spring? We have chipmunks, squirrels, and it seems like a great many moles out here in this yard, so this experiment will let us know.

I will write about that next spring. Wish me luck preserving these Dahlia tubers since I have never done this before. We will learn this together if you are in the same boat!