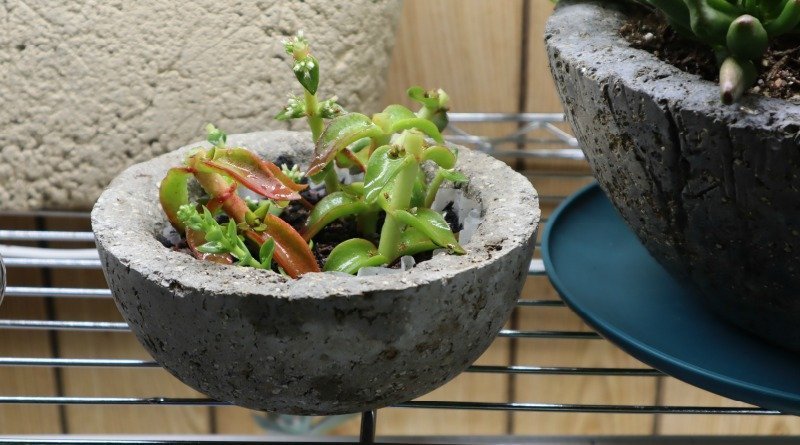 In Ohio, it is time to start worrying about frost, so I am trying my best to get all of my tender plants inside for the winter. One of my plants that I filmed earlier this year, Crassula capitella “Campfire”, is so colorful that I just hate bringing it inside. Will I have enough light to keep the “Campfire” burning?

But this plant has also suffered during its season outside due to etiolation. Due to lack of adequate sunlight, stems grow longer with more space between the leaves as the plant reaches toward more sunlight. This results in weaker stems and smaller leaves. Sometimes lack of sunlight keeps a plant from flowering. In this case, my “Campfire” did go ahead and flower, but since this is my first year with this plant, maybe it could have been better?

Initially I thought the plant was getting enough light. The Campfire was in a sunny east exposure but when we had work done on our deck, I put it in an overhang area where the sunlight didn’t reach it after about noon. But this area was in no way shady at all. So I was surprised when the plant kept getting taller and thinner. The leaf nodes were so much farther apart than in the lower part of the plant. Apparently this is one of those plants that can take the full and bright sun, and be gloriously colorful.

As I’ve shown you in the video, the plant reached out to get as much sun as it could, but with the work on the deck taking longer and longer ( a whole long story; ended up ripping out new deck and replacing it again…sigh.), the capitella went far too long out of the direct sun that it needs so badly to keep its color.

My starved-for-sun succulent got so much taller and its leaves were separating with long gaps between them. The plant was trying to get more and more light to its leaves. Once this happens, you can’t fix it. The stretched part stays stretched even when I gave it more sun. Just the new growing leaves started coming in closer together. So I had to trim it and propagate more plants. What am I going to do with more?

My decision was to root the cuttings in vermiculite. This medium is great for root cuttings as I explained in another post.  Using rooting hormone is up to you if you root your cuttings on any plant. Most of the time I don’t feel that it is necessary, but this time I choose to use it. I am not rooting all the cuttings, just a few, so that I can plant them in some more arrangements next year. ( I will plant them with sun lovers.)

Hopefully most of the cuttings will root and I can include this plant in a lot of my arrangements next year. And the full pot in the image at the top of the page won’t be too shabby, right? Let the sun shine ( or my artificial light shine this winter).

Since these plants turn red with bright light, couldn’t I use them to test my windows and see which one is giving me the best light? I sure have a lot to pot up for experimenting.