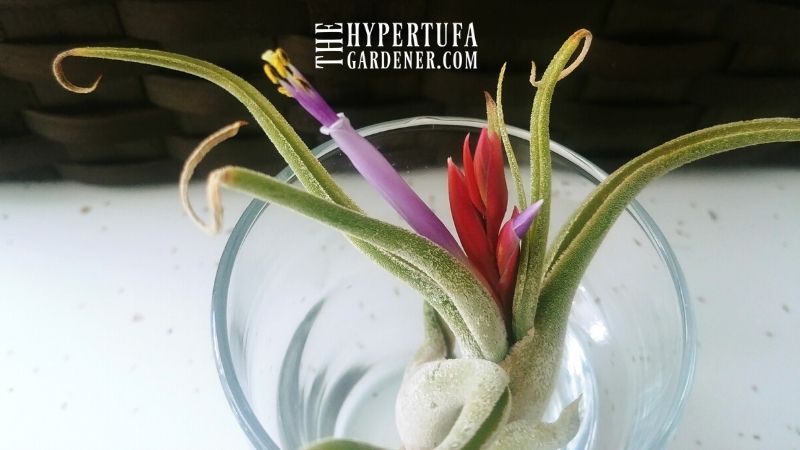 Way back last summer before we moved, I found a weird stem coming out of the middle of one of my air plants or tillandsia. Not sure exactly what my variety is but I think it is perhaps a xerographica or ionantha.

I am strictly going by that “bulb” shape and lavender flower spikes so if you have any different information, please let me know.

My tillandsia survived the move easily but I worried about the brutal change to its atmosphere. Moving from a basement that consistently stayed at about 65°F and abruptly being carried into 90 – 108°F temperatures worries me for any plant.

I carried them in glass pots and plopped them on the kitchen window sill with eastern exposure. As you can see in the video, those windows were pretty dirty (how embarrassing), but I had to record the blooms, didn’t I?

What Made My Air Plant Bloom?

Perhaps my blooming air plant is a result of it being happy? Maybe this particular tillandsia liked the conditions where it was living.

I will mention here that mine were under grow lights, nothing special with color spectrums or anything. Just a strip LED light from the Big Box store.

Growing in a basement, it would seem temperatures are a little low for them, but if it caused it to bloom, it must have been just fine.

I gradually noticed a flat-shaped tract forming out of the middle of this air plant and wondered if it were creating a bloom. Turns out that it was!

The flattened tract gradually grew a long purple or lavender stalk that opened to a “flower” or growths that seemed like stamens and pistils. Three lavender stalks gradually emerged.

Those colors were very vivid and pretty. I took other photos but I cannot find them. These are the only ones I could locate. The flowers lasted for many weeks.

Cutting off the remaining brown stalk from the flower will be my next step in grooming my air plant. It has been there for a few months and carefully cutting it off is supposed to hasten the growth of the pups.

My blooming air plant didn’t read the manual and went ahead and pupped anyway. Isn’t she marvelous?

I have learned that I should not have immersed the blooming air plant in water since that could cause the flower to rot. What I should have done is just mist it with water instead.

I am collecting rainwater (or snow water) for my air plants now. I previously used distilled water or humidifier water, but I think now rainwater will be best.

And a drop of liquid fertilizer will be included in the water. Very diluted for sure.

I was surprised to learn that I CAN pull off old brown and dried leaves or sections from my Tillandsias. Regular grooming keeps them neat so I have done that with my air plants now.

Even the tiny brown ends can be trimmed off with clean clips or scissors. That way your Tillandsia will always look good.

I am so happy with my Tillandsia and hope to have many more blooming air plants. I will keep an eye out for them on sale this year. Really want one of those large ones!

Keeping an eye out for more pups. Though not now in a basement, my plant room gets lots of sunlight and it is painted a very light grey (almost white). And I still have LED lights on a timer to keep them well lit.

Perhaps a tour coming soon? Be sure to check out my YouTube channel when I publish a tour. Thanks for visiting!