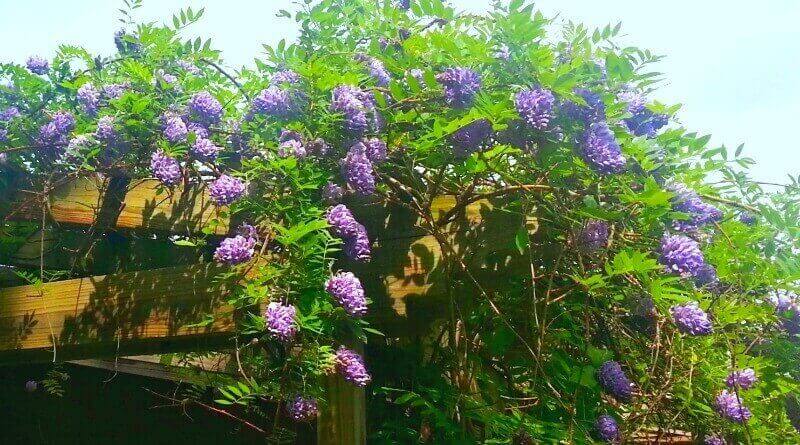 My daughter has always been in love with wisteria.

She loves the twisted form it takes on as it grows. Certainly  wisteria is the twisted vine which surrounds every castle in a little girl’s fairy tales? You know Sleeping Beauty’s castle must have been surrounded by wisteria vines. And surely the Seven Dwarfs’ cottage was covered with it. And all the castles probably had those twisted, wonderful curling branches all over them.

Because of her love for this plant, I purchased a wisteria vine for her as a Mother’s Day gift several years ago. My only little girl had gotten married and given us a grandson. She and her husband purchased a home when their son Jacob was about 4 months old. She always dreamed of a patio/pergola out back covered with wisteria vines.

So the next spring after moving there, I took her to our local nursery to purchase a vine. She chose Wisteria frutescens ‘Amethyst Falls’ because it grows slower than its more rampant Asian version. They had just put in a new covered patio out back, and had the side  and a portion of the roof of the patio built as an open pergola. This would be the perfect spot for her wisteria, and we hoped it would climb this strongly built structure , but the blossoms would hang through the open roof.

And it has turned out to be so gorgeous. It is hard to describe how beautiful it is. The scent just slightly hovers in the air, and the twisted branches are just marvelous to see. It will soon be self-supporting (if it isn’t already.)

This is a progression of how the vine appears as the weeks advance in the spring. (She has a Nelly Moser Clematis planted at the lower right. Vining together: awesome!) 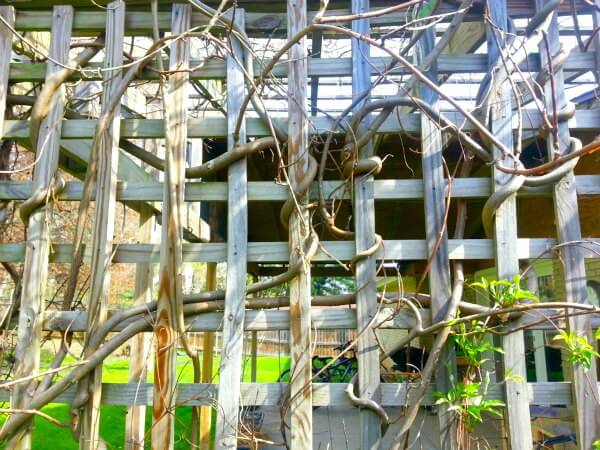 The wisteria vines remain throughout the year and are so pretty against the structure. She keeps it trimmed away from the house and directs the growth on to the pergola.

I have heard that there are wisteria vines that are over a hundred years old and cover acres. That would be wonderful to see.  See it at Bored Panda here.

Look at the spiraling of the vine. Nature is determined to grab hold and never let you go.

The network of vines grow more dense each year and my daughter is hoping for full coverage soon. But the network of overlapping vines is beautiful as it stands now. This is a photo of the racemes as they have just begun to form.

And here they have burst into blossom and gradually their own weight pulls them down, dangling into her patio. So perfect. And it just keeps getting better.

The year 2014 my daughter hosted a birthday party for Jacob. It was a Minecraft party and was so great. We made slime as one of the gifts for the kids.  He was eight years old that year which made the wisteria vine about six years old at the time. I am not sure how old that vine was when purchased, but since it was blooming the first year, it may have been three years old?  Sadly, the vine burst forth with its blossoms about 10 days after the party.   And we had wanted everyone to see and admire it. But it was probably for the best.

A lot of kids, bees on flowers, not a great mix.

But it has been wonderful to watch it grow. Her pergola faces south on that side wall, so it gets a lot of sun. And it gets more twisted and contorted each year. Perhaps those 4×6 treated posts may need reinforcing some day?

This wisteria is a bee magnet, so she is doing a great thing for the pollinators. We have never been bothered by the bees as they hang up on the racemes above us. Her variety has racemes about 10 inches long.

When do you prune a Wisteria?

The best time to prune a wisteria, since it blooms on new growth, is during the late winter period. The vines are all bare then so you can clearly see what you are doing. So right now is not a perfect time since it is currently blooming. I am located in Ohio so you may be into your blooming period already.  But once the blooming is over if you have some rogue vines.

What she does is prune off the smaller vines coming from a main branches. New growth will occur from those cuts and keep your vines more dense and compact. You can also trim after flowering to direct vines where you prefer them to grow.  Trim off the long “whips” since they are just a rogue looking for trouble.  😉  Great info here on Pruning Your Wisteria.

Do you have a wisteria? How do you control its growth over your support structure? Don’t you just love the “twistiness” of it?