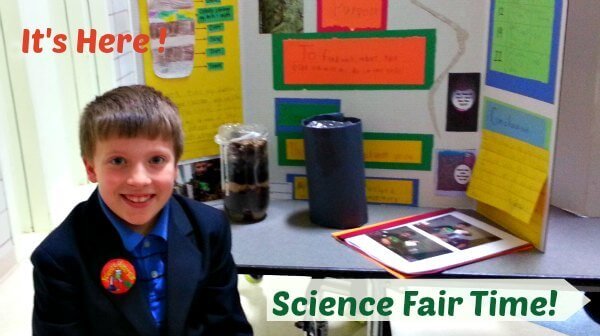 These words strike the annual dreaded Science Fair projects competition in the hearts of school kids. And the groans of despair from Mom and Dad. What can their little second or third grader do this year?  ( More posts about Family Life here.)

First of all, it is a little difficult finding a project that is both simple enough for a second or third grader to accomplish on his own but also be something with a  great science base that would show he or she is learning a basic hypothesis in a branch of science, no matter how simple.

Of course, we parents struggle with the idea that little Cornelia, our child’s classmate, will most like build a completely operational solar-powered flying drone. Out of Legos………..yes, that kid.

Meanwhile, your own little scientist is seeing how many Twizzlers the dog will eat before he vomits.  You know how this goes. But seriously, my little grandson didn’t do too bad for his project that year!

What are we doing this year?

As the kids get older, they can take this in stride and know what to do and when to get it done….preferably not the morning when it is due!

But with the younger kids such as our second grader (at the time), there will need to be some guidance and decision making by both student and parent for the subject of this experiment .

In his case, our second grader decided on my suggestion , a subject of “What Do Wiggly Worms Do For Us?” This fit perfectly in  Environmental Science  that the kids had been studying. And it was a very simple project for him to be able to do.

Basically, he made a small worm “farm.” His Mom and I went to the fishing supply area in Walmart and bought a dozen redworms or red wigglers. His concept was to layer a bit of gravel and sand, soil, leaf mulch, food scraps, wet newspaper in one bottle to display layers and in another bottle, layer it the same way, but add those redworms to it.  Ref: Composting with Redworms.

Then he would make a comparison of the first bottle to the other bottle to show how the redworms broke down the papers and food scraps and mixed all the layers together. And produced castings aka poop which is great for the garden.

Jake  wrote up a chart showing a notation every few days of what was occurring over a period of about three weeks. We took photos of him layering the two bottles and checking his bottles. ( It was  2-liter pop bottles with the top cut off. It was closed with clear sandwich wrap and a rubber band.)

And Mom had him read all the materials and answer questions all along of what was happening as the worms worked their way through the layers, eating and pooping (making castings) , mixing layers until he saw them finally blended all together. The food scraps were decomposed and consumed and it surprisingly took place over that short period of time.

Of course, there were meltdowns when Jake had to stop what he was doing and go check out the Worm Farm and make notations. And he wasn’t over joyed, to say the least, about making those labels and chart displays, but he got through it. And it was SO worth it!

He made his presentation in class and asked if any of the students had any questions. The kids had questions for him and he answered them all!  His teacher said he was great presenter and had studied well.  And yes, his girl was impressed with this Man of Science.

Hard work does pay off. He fussed about the work, he fussed when Mom told him to stop playing and do  his reading  and charting etc.

But he got a special ribbon for his project which meant a great deal to him. He learned time management, deductive reasoning, honed his presentation skills, and his extemporaneous speaking skills…..he made us all proud.

And he learned pride in his accomplishments!

And just a little side note:

His teacher was so impressed and interested in this project that she requested that his Mom and I do a Worm Farm for the whole class! She wanted each of the kids to make his or her own farm and learn about environmental habitats and how the earthworms affect the environment.

We did that on Earth Week in April that year and it was a great success. His teacher applied to the school board and was able to have the Worm Farm project become a part of the Common Core of the second grade science curriculum.

You just never know where your contribution will lead. Girls are attracted to Men of Science.